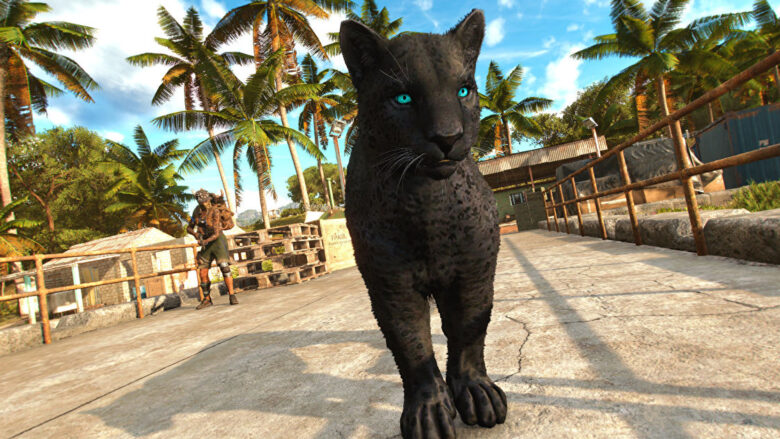 Want to know about the different Amigos in Far Cry 6 and how to get them? Guns For Hire are a thing of the past in this latest installment of Ubisoft’s open-world FPS franchise, and replacing them are Amigos – animal allies you can give orders to in combat and stealth situations.

Some of these Amigos are very easy to unlock, while others require far more work to obtain. Learn how to unlock all seven Amigos in Far Cry 6 below, and the strengths and abilities of each one.

Here are all the Amigos in Far Cry 6 and how to get them:

How to get Guapo in Far Cry 6

Guapo is the first Amigo you’ll encounter in Far Cry 6, and you really don’t need to worry about finding him, since he’s part of the set of main missions on Isla Santuario, the starting island of the game. During the quest Juan Of A Kind, you’ll find both Juan and Guapo in a bar in Armonia. Shortly thereafter, Guapo becomes an Amigo you can control, and part of the mission acts as a tutorial which explains how to give Guapo (and other Amigos) orders.

Guapo is a combat Amigo who can be ordered to attack nearby enemies. His special ability is that he can self-revive after being downed. He can also be upgraded with the following abilities:

How to get Chorizo in Far Cry 6

Chorizo can be found in Madrugada, one of the three main Far Cry 6 territories. Like Guapo, you’ll encounter Chorizo simply by playing through the main missions in this area. The very first quest, Meet The Monteros, will have you find a member of the Montero family named Philly – who happens to be Chorizo’s owner.

Once you’ve returned to the Montero Farm, activate and complete the Who’s A Good Boy? quest. This quest can be completed entirely within Montero Farm, and once it’s done you’ll have Chorizo as a permanent Amigo. Chorizo is a stealth Amigo, meaning he’s not suited for all-out combat but can distract enemies for you, allowing you to sneak up on them more easily. In addition, he can be upgraded with the following abilities:

How to get Chicharrón in Far Cry 6

To unlock the fearsome rooster Chicharrón, you’ll need to head to Patriotas Peak in El Este to meet with the Legends of ’67. Again, the first main mission in this territory will bring you here. After that, you’ll get a quest called Man’s Best Enemy, where you’ll meet with Reinaldo Alvarez, and Chicharrón.

What follows is a series of three short quests which involve following Chicharrón around, protecting it from enemies, and painting large murals proclaiming that Chicharrón was here. After the final mission is complete, you’ll gain Chicharrón as a permanent Amigo.

Chicharrón is very much a combat Amigo, and has the unique ability to leap from a distance at enemies to attack them unexpectedly. He can also be upgraded with the following abilities:

How to get Boom Boom in Far Cry 6

Boom Boom the dog can be found in Valle de Oro. To find him you must begin the quest Boom Or Bust by reading the note pinned to the pole in the centre of Camp Maximas which reads “The Shipment From Montana”. Doing so will prompt a short quest where you must head to the marked location and open a specific shipping container out of several (hint: follow the sound of barking).

Opening the container and freeing Boom Boom will immediately make him join you as an Amigo. He is a Stealth Amigo, and his special skill is to retrieve loot from dead enemies for you. In addition, you can upgrade him with the following abilities:

How to get Oluso in Far Cry 6

Oluso is by far the hardest of the main Amigos to obtain, because you’ll have to complete a set of three treasure hunts – one in each of the three main territories. To begin the quest, head to the Oluwa Cave on Isla Santuario (to the east of Ventura Summit) and read the note on the floor at the end of the cave.

Then you’ll need to find the three treasure icons newly marked on your map (one in Madrugada, one in Valle De Oro, and one in El Este) and complete these mini-quests in order to return the three Triada relics to the Cave. The Valle De Oro one is particularly tricky, so we’ve written a walkthrough about it here. Once the three Relics are yours, return to the Oluwa Cave. You’ll then be attacked seemingly by multiple spectral cats. Defeat them, and you’ll see Oluso lying downed on the ground before you. Revive them, and they are yours – along with an extremely strong Supremo and Resolver Weapon combo, I might add.

Oluso is a powerful Stealth Amigo who can quickly and silently kill enemies for you. They can be upgraded with the following abilities over time:

K-9000 is a cyber-dog Amigo that you can only obtain by purchasing the Blood Dragon Set day one DLC for Far Cry 6. This DLC is included in both the Gold Edition and the Ultimate Edition of the game, so if you’ve purchased either of those, you’ll get access to K-9000 once you leave Isla Santuario and reach Libertad Island.

K-9000 is a combat Amigo whose hardened exterior makes them more resistance to bullet damage, and immune to both poison and fire. In addition, he can be upgraded with the following abilities:

How to get Champagne in Far Cry 6

Champagne is another Amigo that you cannot obtain in-game unless you’ve purchased the DLC containing them. In this case, Champagne must be procured by buying the Vice Pack DLC, which is handily contained with the Ultimate Edition of Far Cry 6 (but NOT the Gold Edition).

Champagne is a Stealth Amigo who sets herself apart from the other animals on this list by collecting additional Pesos from dead enemies after combat. She can also be upgraded with the following abilities:

That’s all seven Amigos in Far Cry 6 and how to unlock them. While you’re here, be sure to check out our list of top Far Cry 6 tips and tricks! We’ve also got primers on the different ammo types in the game and how to destroy Anti-Aircraft Cannons dotted about the landscape.