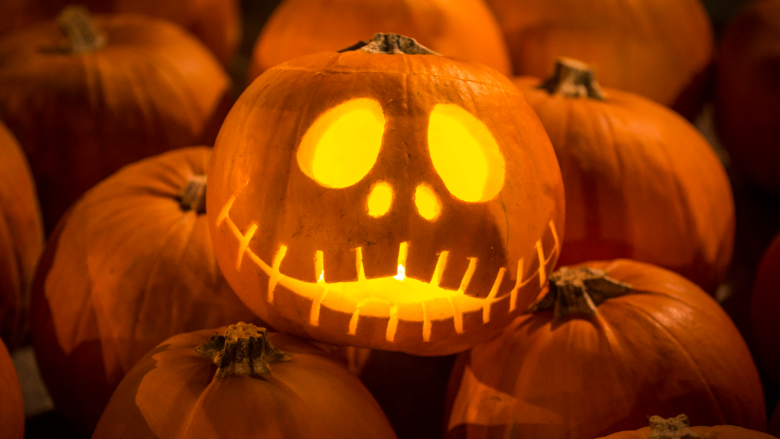 Halloween is here and while you may enjoy this holiday, you might not be as into scary horror games as others. You aren’t alone! Horror games can be incredibly intense, even for those who love a good scary movie. But maybe you still want to enjoy some games on Halloween, just without all the jump scares.

To help you folks out, I’ve put together a list of games I think will get anyone into the Halloween spirit without making you scream in horror or close your eyes in fear.

Zombies! Love ‘em or hate ‘em these undead bastards are a big part of our current pop culture landscape. But most of the time you are running from them, killing them, or being eaten alive by the undead. Stubbs The Zombie flips the script and has you star as a zombie, eating brains and farting on people. It’s a bit odd, but if you can find a way to play it this Halloween season, I highly recommended it. Or just listen to the soundtrack. It’s very good too.

As this list shows, there are a lot of games with creepy or eerie atmospheres. But not many games are actually set during Halloween. Sure, some games like Bully include Halloween sections or areas, but few games let you explore a Halloween night as a kid. This is one of the main reasons I had to include Costume Quest and its sequel on this list. In this turn-based RPG released by Double Fine in 2010 (oh god… how has it been ten years already…) you play as kids in Halloween costumes fighting monsters and trick-or-treating. What’s more Halloween than that?

Weird, strange, and haunting monsters and other bizarre paranormal things fill the world of Control, the third-person action shooter from Remedy Entertainment. It makes for a creepy and unsettling atmosphere. But there aren’t any real jump scares or moments of extreme gore in Control. Instead, the fear comes more from the unknown and the strange things you encounter. And if anything gets too scary, just shoot it a hundred times with your fancy paranormal pistol.

That Ghostbusters game from the Xbox 360 and PS3 wasn’t perfect, but it was a perfect Ghostbusters game if you get what I’m saying. What I mean is, it had all the sound effects, characters, and ghosts you love, it just all came in a mediocre third-person shooter package. The recently released remastered versions of this game don’t improve them much, but they do look nicer and it is now easier than ever to play this game. And while the action might be… eh the ghosts are still ghosts and perfect for Halloween.

Any of the Luigi’s Mansion games would be perfect to play around Halloween. But I’m putting the most recent game on here because I just adored it. It looked wonderful, had some genuinely great music and the gameplay was incredibly satisfying. Smashing ghosts into walls never gets old. NEVER. If you have kids around this Halloween and they can’t go out trick-or-treating because 2022 sucks, this is a nice family-friendly spookfest to boot up on your Switch.

I love The Nightmare Before Christmas film. It’s a must-watch for this time of year. And while I’m not saying anyone should remake or try to pump out a sequel, maybe you are like me and can’t help but think about that world and the characters who inhabit and wonder “What happened next?” Well, wonder no more! Back in 2005, Oogie’s Revenge was released on PS2 and Xbox. It’s a sequel to the original film and it’s like a Disney spin on Devil May Cry. Seriously. It’s not great, but it’s better than you might expect and a perfect game for the creepy Halloween season.

Released in 1988, Splatterhouse is a classic beat ‘em up from Namco that plays like other beat ‘em ups from that era. But unlike many of those other games, Splatterhouse was more gruesome and scary. In Splatterhouse, you play as someone who is totally not Jason Voorhees and work your way through levels punching and killing monsters who are stupid enough to get in your way. It still feels great in 2022 and its retro scares are best experienced in a dark room during a cool October night.

This is a mobile game. STOP! Wait, don’t leave. You can actually play it on consoles too. Regardless of its origins, I’ve been playing a lot of this game recently and it’s a perfect little puzzle game drenched in cartoonish blood and murder. You fling Jason around small puzzles, trying to kill all your victims while the head of your dead mom encourages you and helps. I highly recommend it for Friday The 13th fans or anyone who digs funky music in their slasher-themed puzzle games.

If you enjoy action platformers from back in the PS1/PS2 era and also love Halloween, I’d check out Pumpkin Jack. It features gameplay similar to the classic MediEvil games, but with a more colorful and cartoony visual style. You unlock different weapons and forms as you progress through a half dozen or so levels. All and all it will take you about four or maybe five hours to complete, perfect for a weekend. Open your windows, let that fall air in and enjoy Pumpkin Jack, hopefully with some Halloween candy close-at-hand. Oh and speaking of MediEvil…

Was the world clamoring for a remake of the original PS1 MediEvil? I don’t think so… but we still got one in 2019. And to my surprise, it’s pretty dang great! Yeah, the camera can be a bit annoying, but the rest of the game is a charming, spooky adventure. You could of course go back and play the original game, but if you don’t want to deal with old consoles or emulation, then this PS4 remake is a fantastic way to enjoy some MediEvil-action in 2022.