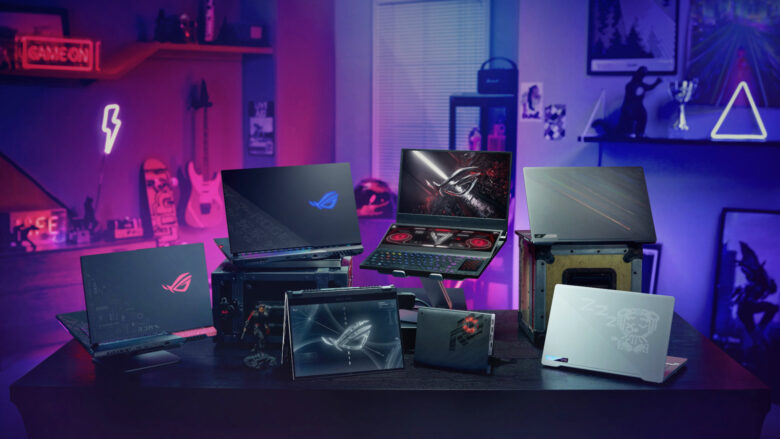 While the perfect way to play the best PC games is on a full-sized desktop, sometimes size constraints or a nomadic lifestyle make a gaming laptop a great alternative, ensuring you get PC gaming quality wherever you go.

However, choosing the perfect gaming laptop takes a lot of commitment. When you build a gaming PC you can swap out parts later if you want an upgrade. Because laptops often feature bespoke components and aren’t designed to be tinkered with, it isn’t as simple as picking out the best graphics card and best gaming CPU to suit your personal needs. Not only is there less customisation, but you have to look at other laptop-exclusive requirements, such as battery life, screen size, resolution, build quality, and aftermarket care.

With the recent arrival of Nvidia’s mobile RTX 30 series cards and AMD’s new mobile CPUs and GPUs, the latest gaming laptops are becoming just as good, if not better than the best gaming PC builds. We’ve come up with our picks for the best laptop for gaming in 2022, whether you’re wanting to play triple-a blockbusters like Watch Dogs: Legion, or just want a laptop that can crank up the frames in Fortnite.

Here are the best gaming laptops: 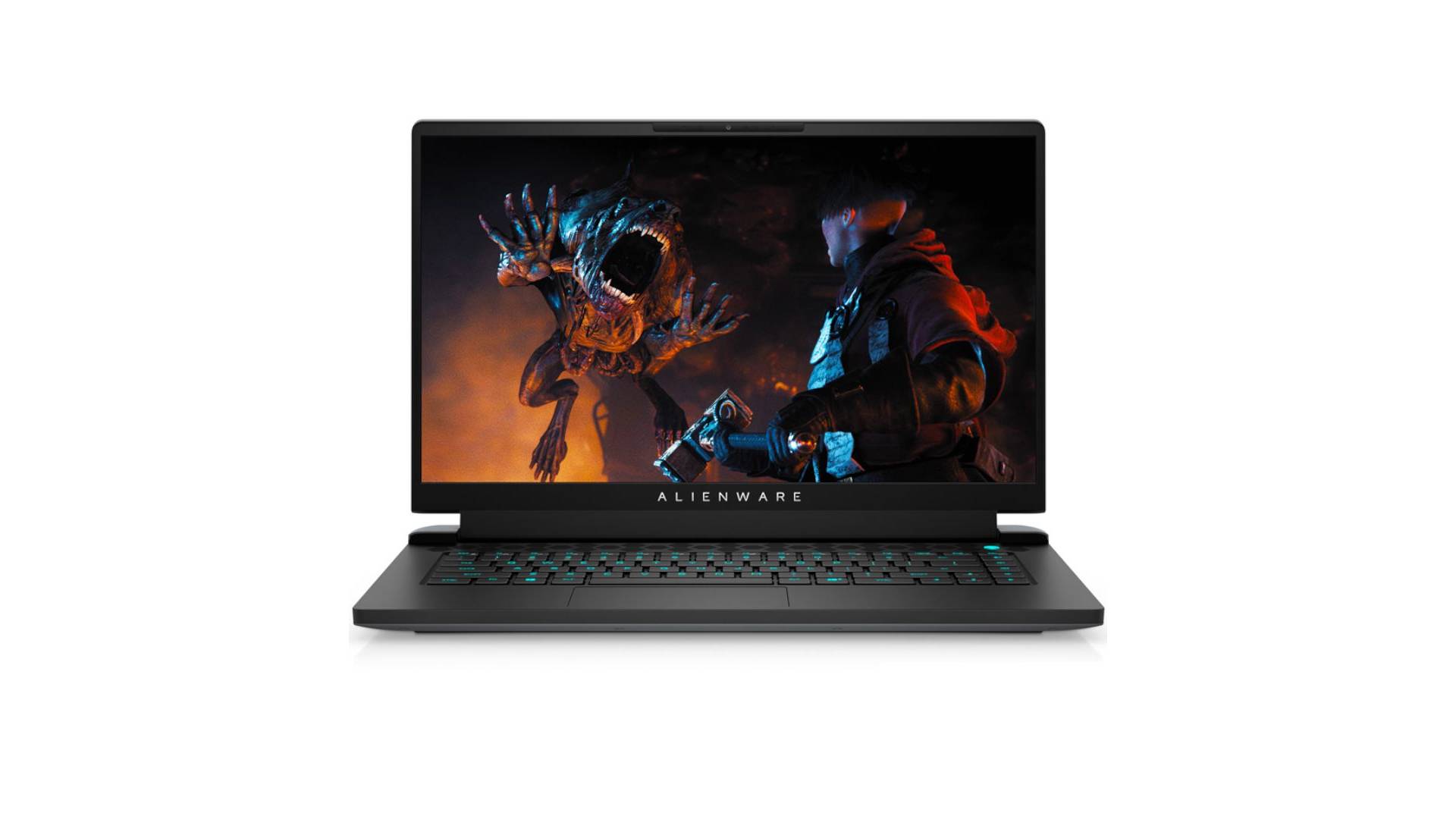 The best gaming laptop is the Alienware M15 R6.

Alienware has been making incredible portable rigs for what seems like forever, but its latest entry into the gaming laptop space is out of this world. Naturally, the X15 features spectacular specs, like an 8GB Nvidia RTX 3080 GPU, Intel’s 11th Gen Core i7 11800H CPU, 32GB of RAM, and 2TB of NVMe gaming SSD storage. Yet, the M15 R6’s real secret weapon is actually its keyboard, which isn’t just RGB backlit; it’s also mechanical.

That’s right, this slimline laptop has a real mechanical keyboard, and it’s far from being just a novelty. Not only do Cherry’s collaborative keys feel tactile and satisfying, but they also utilise anti-wobble and anti-ghosting technology. Best of all? Unlike previous mechanical laptop keyboards, the R6’s keys are as low profile as a traditional membrane setup. 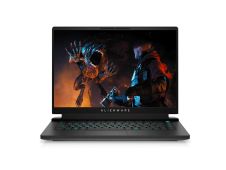 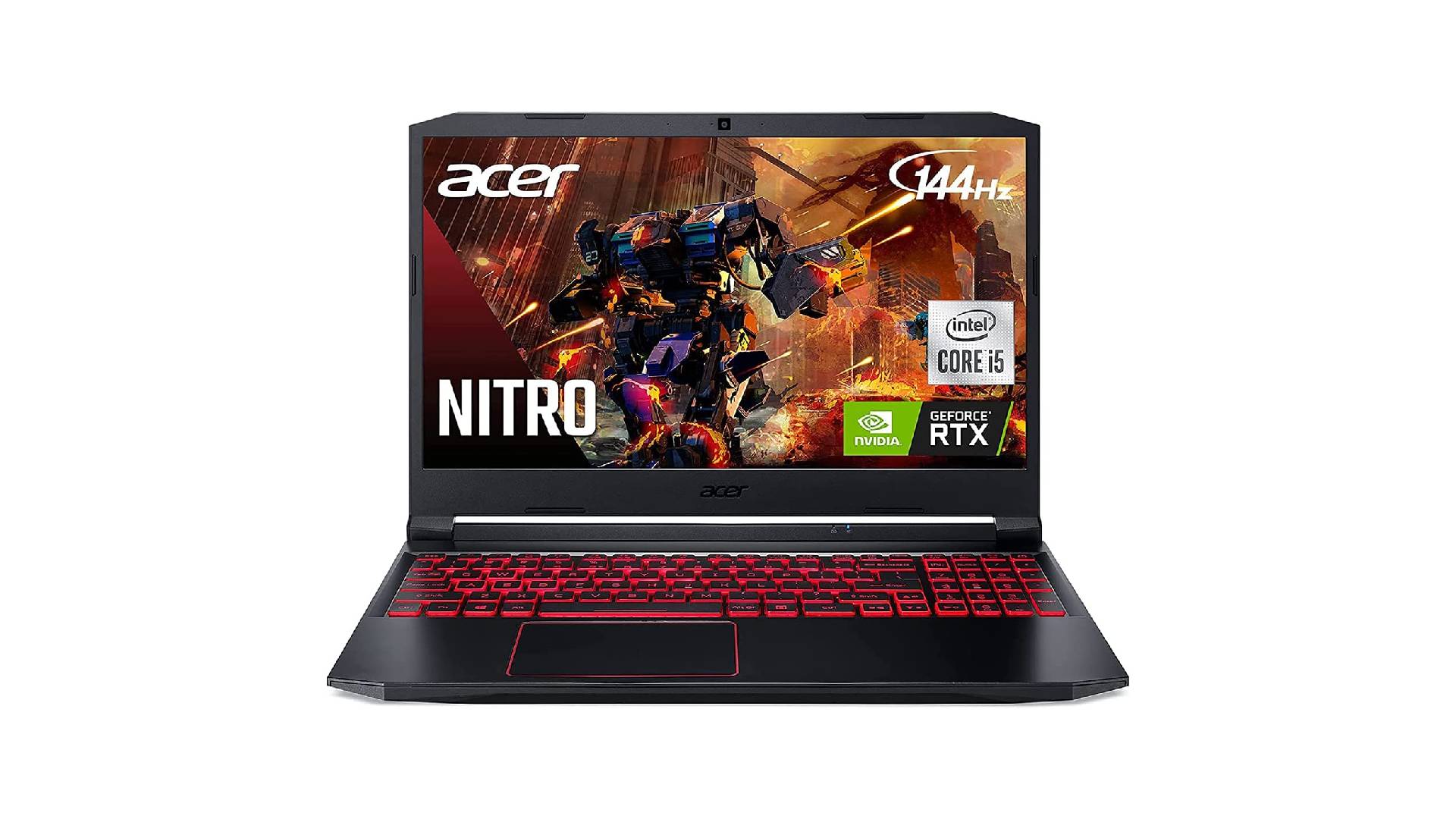 The best cheap gaming laptop is the Acer Nitro 5 AN515.

The Acer Nitro 5 is a great option for anyone looking to acquire a cheap portable gaming PC. Armed with Nvidia’s RTX 3050 laptop GPU, this laptop is perfect for playing the latest games in 1080p with high detail settings. The Nitro 5 also has an Intel i5-10300H CPU, 8GB DDR4 memory, and a 256GB NVMe SSD under the hood, which helps gives it the edge over other budget gaming laptops currently on the market.

Acer’s RTX 3050-fueled machine might be the cheapest laptop on our list, but that doesn’t mean it’s not out to impress. Not only does the laptop come with a red-backlit keyboard and an aesthetically pleasing outer shell, but it also wields a 144Hz IPS display. The Nitro 5’s 1080p panel boasts vibrant colours and great viewing angles, but its refresh rate should also make your gaming sessions feel buttery smooth – provided you adjust your visual settings to boost fps. 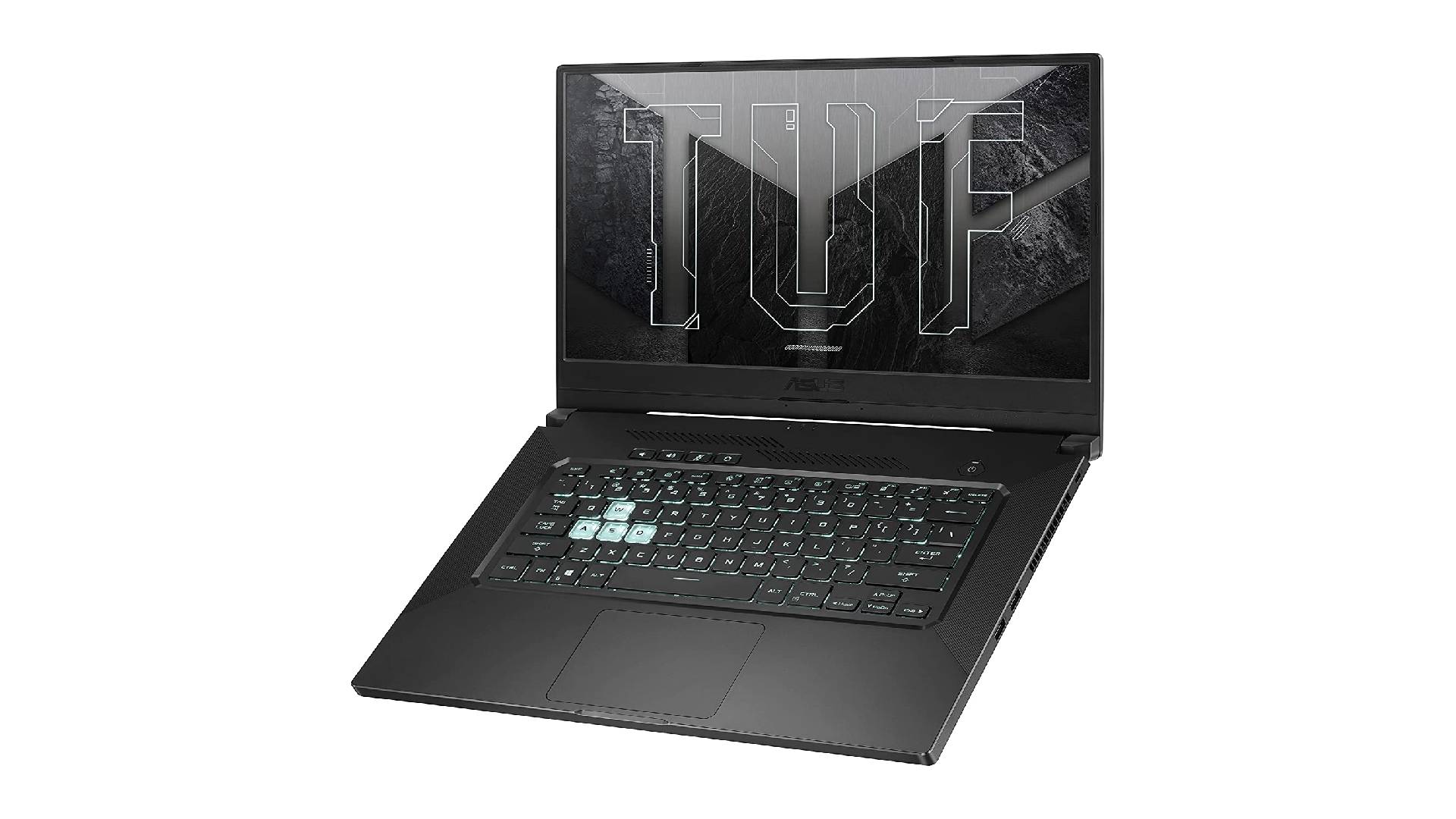 This 15.6-inch laptop from Asus is a brilliant mid-range gaming laptop with an Intel i7-11370H CPU, 8GB of RAM, and Nvidia’s RTX 3060 mobile GPU – a card that’s sure to provide a comfortable 1080p gaming experience, especially when using the laptop’s 144Hz display. Being from Asus’s TUF range, it’s designed to stand against the daily knocks and vibrations that laptops endure while getting moved about.

The Asus TUF Dash F15 also features easily accessible RAM and SSD slots, so you’ll be able to make some upgrades down the line. If you’re not sticking to a $1,000 budget, an RTX 3070 variant of the Dash F15 is also available, while UK customers can also snag 16GB of DDR4 memory at a similar price point. 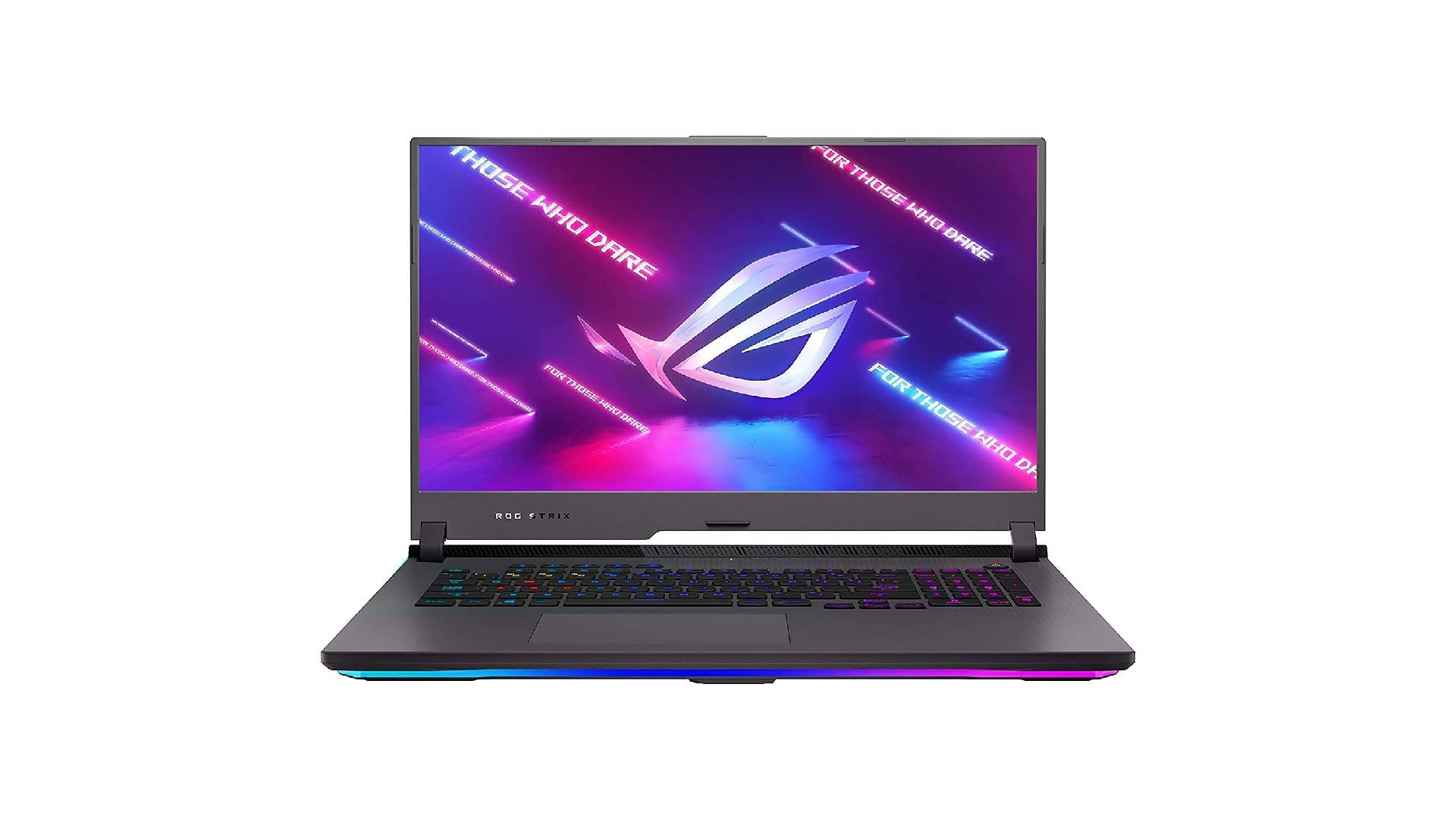 Asus’ ROG Strix is a machine that’s not just a great desktop alternative; it can also act as a fantastic gaming monitor replacement. The Strix’s 17.3-inch anti-glare IPS panel is a 300Hz heavy hitter that both looks fantastic and provides extra room for productivity and play. However, this laptop is more than just a screen, as its RGB edge lighting and ultra-thin screen bezel are sure to turn a few heads at your next LAN event.

The Strix has style, but it’s also got heaps of substance within its fancy exterior. At the heart of this hefty piece of kit is an AMD Octa-Core Ryzen 9 5900HX that’s capable of up to 4.6GHz boost speeds, an Nvidia RTX 3070 with ROG boost, and 16GB DDR4 RAM. Last but not least, the portable rig also comes with a 1TB SSD to boot, so you won’t have to worry about any potential storage woes. 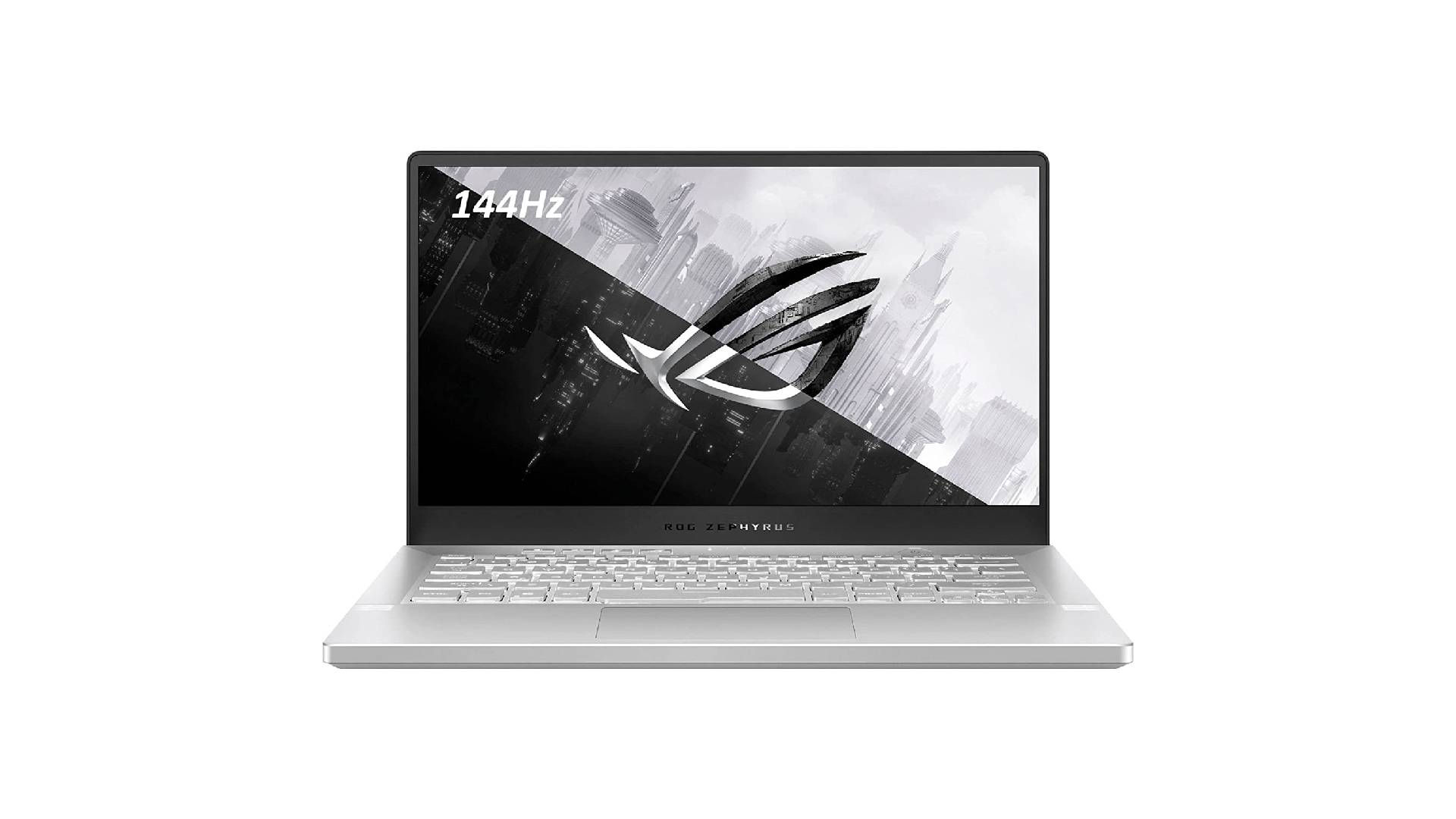 Large, elaborate gaming laptops come with many benefits, but lugging them around is something of a chore. However, the Asus ROG Zephyrus G14 is a lightweight alternative that isn’t light on features. Nestled within the Zephyrus G14’s 0.7-inch thick frame is an Nvidia RTX 3060 Max-Q, an Octa-core AMD Ryzen 9 CPU, and 16GB DDR4 memory, making big gaming experiences more than possible on this lean machine.

The Zephyrus G14’s might occupy less space than your average portable gaming rig, but the laptop also comes with a generous 1TB NVMe SSD. Asus also hasn’t skimped when it comes to the G14’s screen, as its 14-inch panel runs at a silky 144Hz with a full HD resolution that perfectly matches its choice of GPU. 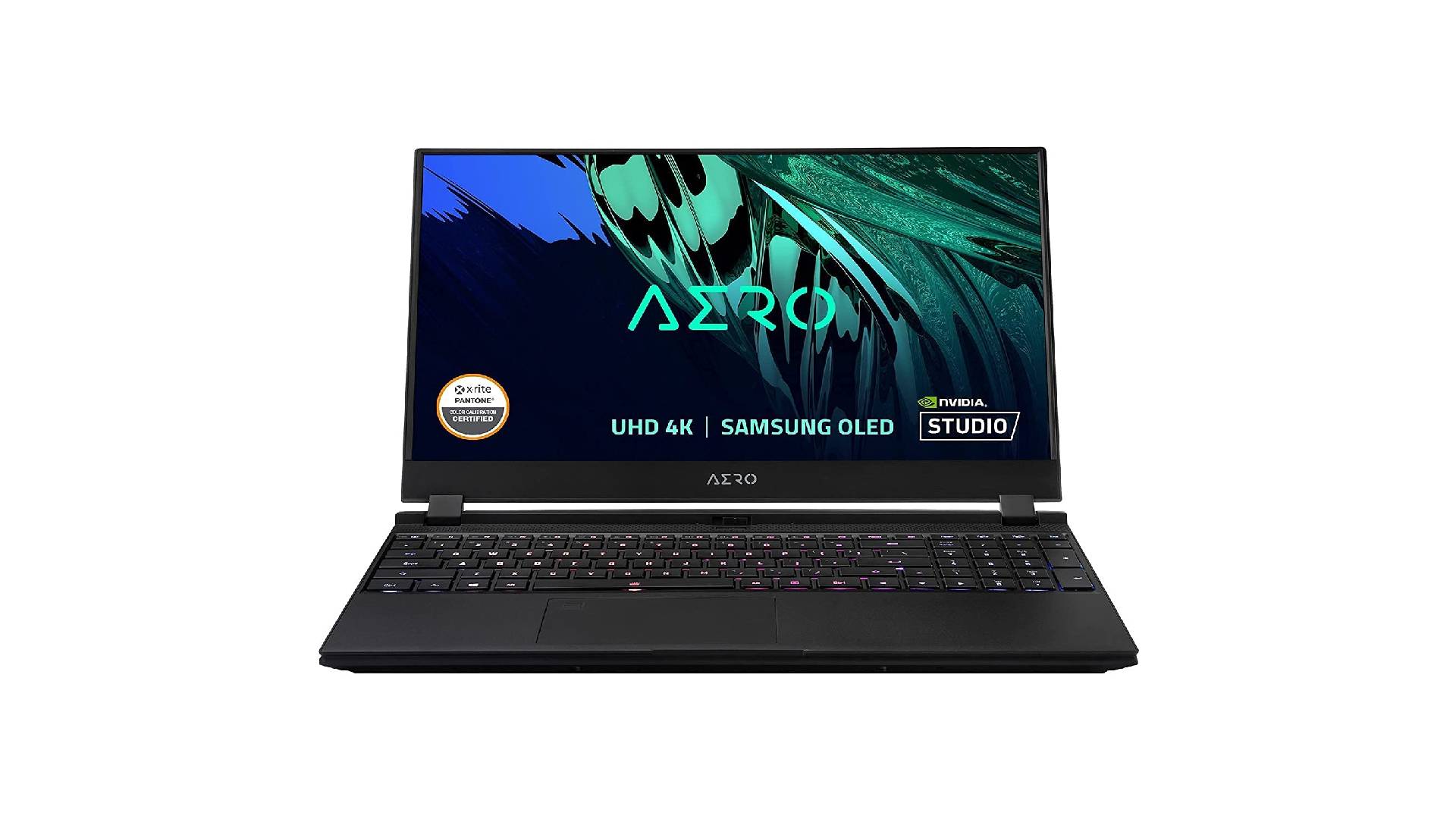 The best 4K gaming laptop is the Gigabyte Aero 15.

For many people, gaming PCs means an unrivalled high fidelity experience, so why should playing on a laptop be any different? The Gigabyte Aero 15 is essentially a PC gaming peacock, complete with an ultra-vibrant AMOLED 4K display that’s sure to make the latest games look like a digital canvas.

Sure, the Aero 15’s superpower is its impressive panel, but it’s also an absolute powerhouse that puts even fully-fledged desktop setups to shame. Driving this laptop’s superior screen is an Nvidia RTX 3080, a card that’s more than capable of maintaining steady 4K gaming on the go. Partnered with Nvidia’s latest laptop GPU is the 11th gen Intel i7-11800H CPU with a blistering boost speed of up to 5Ghz, so efficiency is guaranteed, whether you’re playing or watching, or working.

Why would you consider buying a gaming laptop over a traditional desktop setup? If you’re constantly on the move for work or attending LAN parties, a gaming laptop is ideal, and they’re getting closer to replicating the performance of a true desktop. With the current stock situation seeing desktop graphics cards and CPUs massively inflated in price, gaming laptops are also a sneaky way to get your hands on the latest specs for a good price.

There are a few crucial considerations to make other than raw power and looks when buying a gaming laptop, such as battery life and weight. If you’re looking to use it out and about for general purposes too, without easy access to a power source, then the ultra-lightweight Razer Blade Stealth 13 with its 10-hour battery life would be a great choice. On the opposite end of the spectrum, if you’re likely to use the laptop sat at a desk most of the time, then the HP Omen 17 gives you that large screen experience, where its 3-hour battery life and slightly hefty build are less of a problem.

what ports do i need?

As gaming laptops get thinner and thinner, they end up shedding the amount of ports they can handle. You can get an adapter to alleviate the pain, but keep an eye out for Thunderbolt 3 or 4 support if you need faster transfer speeds as this is something that can’t be fixed with an external purchase.

how can i use a monitor with my laptop?

On thinner models, look out for Thunderbolt ports that’ll let you plug in a display adaptor. Make sure the port has enough bandwidth for higher resolutions, however. Although it’s getting rarer, some laptops still rock a good old HDMI port for a fast connection to your monitor.

Network N earns commission from qualifying purchases via Amazon Associates and other programs.