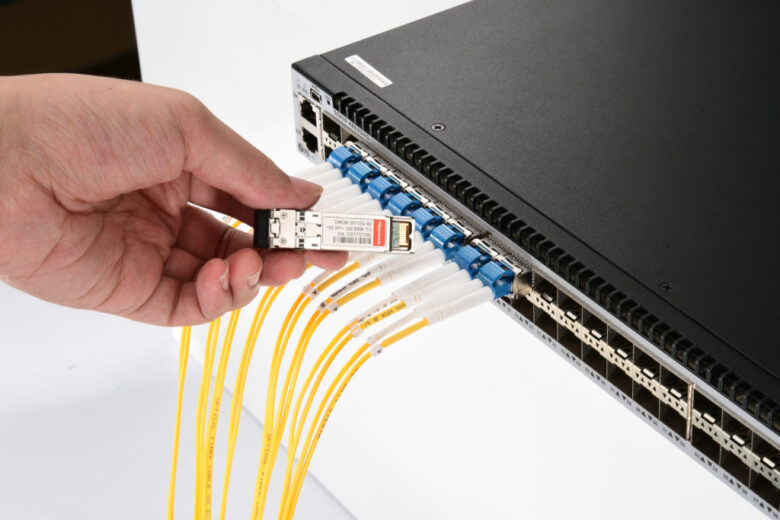 The MCU mainly has three functions: one is to exchange data with the host device (Host) in real-time, monitor the entire module system, manage the logic input and output of control signals, configure the function pins of the driver chip, and write the initialization configuration parameters;

Read the ambient temperature, update the bias current and modulation current of the driver chip in real-time, and perform temperature compensation on the laser to ensure that the output optical signal always meets the requirements of the transmission link. Intelligent monitoring of the road.

The specific working process is as follows: after the module is powered on, the MCU controller starts to work, which is responsible for configuring the driver chip and setting parameters; the high-speed transceiver driver chip starts to work normally after setting the parameters and converts the high-speed differential electrical signal received from the Host into the signal of the driving laser.

Bias current and modulation current, drive TOSA to emit light and transmit optical signal; the optical signal received from ROSA is converted into an electrical signal by ROSA and then sent to the high-speed transceiver driver chip limiting amplifier for amplification, and then sent to the Host for processing; MCU drives the driver The working parameters of the chip are adjusted in real-time, and the TOSA is controlled to maintain a stable working state under various environmental conditions. The MCU is interconnected with the driver chip through an input/output (I/O) interface and an I2C data interface.

This article will introduce the development trend of the high-speed optical module market and propose follow-up development suggestions.

According to Omdia data, the market size development trend of high-speed optical modules is shown in the figure below. In terms of 400Gb/s intensity modulation optical modules, 400Gb/s optical module products based on single-wavelength 100Gb/s have begun to occupy an important position in the deployment blueprint of operators and data centers, and there will be a large demand space in the next few years.

With the rapid growth of DCI demand, they will quickly occupy the main 400Gb/s coherent market in the next few years. In terms of 400Gb/s phase dry optical modules with transmission distances of 1000km and above, mainstream equipment manufacturers already have long-distance transmission capabilities based on probability shaping technology 90+GBd DP-16QAM-PCS, and domestic operators have completed 1000km transmission in 2021. The current network pilot; Using 128GBd DP-QPSK can theoretically achieve a longer transmission distance and is currently in the technical research stage.

According to the evolution trend of switching chips, market demand, and technology maturity, 800Gb/s intensity modulation optical modules will enter the market in 2022 and 2023 and will be applied on a large scale around 2026.

In the early stage, the 8×100Gb/s solution (2×400G CWDM4) will be used. The priority is to realize the smooth evolution from 400Gb/s to 800Gb/s. In terms of 800Gb/s phase modulation coherent optical modules, it is expected that the DP-16QAM code type non-pluggable modules will be commercialized earlier, and the pluggable modules are expected to enter the testing phase in the second half of 2023 and achieve small-scale commercial use in 2024.

In the longer term, with the continuous evolution of high-bandwidth chip devices and algorithm technology, the transmission distance of 800Gb/s coherent optical modules will develop from 80km and below to long-distance, and the application scenarios will gradually shift from DCI to metropolitan, provincial, and even Backbone network expansion.

The rapid development of 5G bearer, data center, and upper-layer business applications has brought opportunities and vitality to the optical module market, and it also poses higher challenges to optical modules such as high speed, high performance, low power consumption, and low cost, especially high speed is the core.

Demands, 400/800Gb/s high-speed optical modules are important technical nodes for various application scenarios. The upstream and downstream of the industry chain and all parties in the industry need to further strengthen cooperation, focus on consensus, and coordinate to promote the healthy development of the high-speed optical module technology industry from the aspects of strengthening technological innovation, guiding market aggregation and strengthening the industrial foundation.