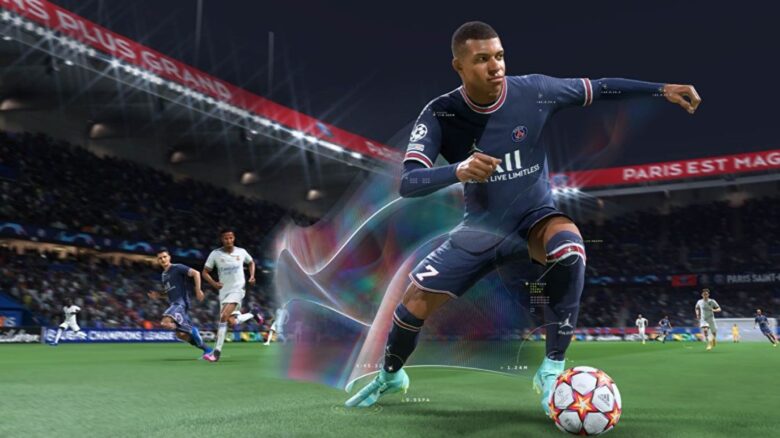 FIFA’s at its most fun when you’re scoring goals. To make that process as smooth as possible, you’ll need to stack your team with the some of the best strikers in FIFA 22.

Whether you’re lumping it up to the big man up top or playing intricate triangles with technical wingers, if your personnel aren’t up to the task, your game plan won’t come off.

As traditional wingers have become rarer, with more emphasis placed on cutting in with inside-forwards than crossing, wide-men have been grouped with the strikers for the last few years.

First up, we’ll go over the absolute highest rated forwards in FIFA 22 based on their overall.

Then we’ll list some of the next generation of attacking talent coming up to replace them, before discussing a few fun options to sign in your first season of Career Mode.

As sports science improves, more and more players are performing at the highest level well into their 30s. Nowhere is this more obvious than with the highest rated strikers in FIFA 22.

They might not be at their absolute peak, but these are the top rated forwards this year.

For a bit more youthful energy, these are the highest potential strikers in FIFA 22.

They might not be quite ready to lead the line for one of Europe’s wealthiest clubs, their stats will improve quickly with game time.

Best FIFA 22 Strikers to sign in the first season

So, you’ve scoped out the perfect target and prepared a bid, only to find that the player in question only just joined their current club – disaster!

Here are a few great strikers who are available to sign in the first season of Career Mode.

Anthony Martial – Man United – £34.5m Value – 25 – With two elite veteran strikers through the middle and two hometown heroes on the wings, Anthony Martial seems surplus to requirements in the red half of Manchester, but in FIFA 22, quality stats across the board make him a strong signing for Europe’s top teams. With nearly 90 pace and dribbling, and strength, shooting, and passing stats all around 80, he still has room to grow further with his 84 potential.

Breel Embolo – Borussia Monchengladbach – £16m Value – 24 – Two great, reasonably realistic, signing opportunities come from the same club, Borussia Monchengladbach, who could be looking to bring in some cash for a rebuild following the departure of Marco Rose to Dortmund. The older of the two, Breel Embolo starred for Switzerland in Euro 2023 and has good movement and power stats for being 77 overall. Injuries have seen him struggle to live up to his early career hype, and his 69 finishing is pretty terrible, but will improve quickly with training thanks to his +5 potential growth.

Marcus Thuram – Borussia Monchengladbach – £27.5m Value – 23 – Marcus Thuram on the other hand, has it all from the start, and is an awesome signing for top clubs. Bizarrely listed as a left midfielder in-game despite always playing further forward, Thuram has the perfect stats to be a top-quality centre forward, combining mid 80s pace, strength, and dribbling with 80 finishing and heading accuracy.

Darwin Nunez – Benfica – £17m Value – 22 – An absolute physical monster with +9 potential growth to round out his decidedly raw shooting stats, Darwin Nunez is looking to have a breakthrough season in Portugal this term. Despite only netting 6 times in 29 appearances last season, he almost equalled that tally in the first 5 games of the 21-22 season – not to mention scoring a brace against Barcelona in the Champions League. A great option for a mid-tier Premier League team, Nunez offers Haaland-esque power with the promise of similar finishing in the future.

Dane Scarlett – Spurs – £1.5m Value – 17 – Thanks to his cheap value and 86 potential, Dane Scarlett looks to be this year’s Mason Greenwood – a young English striker you can unrealistically snag to tear up the lower leagues and grow incredibly fast. His stats are pretty mediocre to start with, but after some game time, they won’t stay that way for long.

Ricky-Jade Jones – Peterborough – 675k Value – 18 – For a more realistic Road to Glory signing, take a look at Ricky-Jade Jones. His technicals and stamina are not great, but with over 90 pace and 80 potential, he can at least cause some problems for slow defenders straight away. Certain to be a lower league favourite.

Karim Adeyemi – RB Salzburg – £4.5m Value – 19 – The Red Bull infrastructure is brimming with talent, and Karim Adeyemi looks like the next Timo Werner. With sky-high speed and good dribbling and finishing for his 71 overall, his value is attainable for a lot of clubs. Nurture his 85 potential and he’ll be a top talent for years to come.

Best FIFA 22 Wingers to sign in the first season

Great wing-play can mean the difference between an average team and one that’s awesome to play with.

Here are some exciting wingers to bolster your front line from the first season of Career Mode.

Ansu Fati – Barcelona – £17.5m Value – 18 – After returning from injury and inheriting Messi’s number 10 shirt, Barcelona seem to be building around Ansu Fati for the long term, but after the club’s financial woes throughout the summer, can you really say any player leaving the club is unrealistic anymore? Boasting 90 pace, 80 finishing and 90 potential at just 18 years old, Fati is one of the brightest prospects in world football and can be snapped up by any of Europe’s top clubs.

Luis Diaz – Porto – £33.5m Value – 24 – A speedy dribbler with great stamina, Luis Diaz has long been a fan favourite in Portugal and looks ready to make the step up to the next level in one of the traditional top 5 leagues.

Jonathan Bamba & Jonathan Ikone – Lille – £28m & £25m Value – 25 & 23 – The two Jonathans on the wing for Lille are both quality options for richer European clubs. They’re both inverted wingers that usually play on the opposite side to their stronger foot, and combine lightning pace, tricky dribbling and decent shooting when they cut inside to score or assist.

Thiago Almada – Velez Sarsfield – £10m Value – 20 – Thiago Almada has been a hot prospect for a few years now, and FIFA 22 is no exception. His starting stamina of 74 is a lot better than it has been in previous years, meaning he’s a lot more usable right from the start of a career mode save. Nippy and technically gifted, Almada will quickly grow into a top player thanks to his +12 potential growth.

Octavian Popescu – Steaua – £3.7m value – 18 – For a bit of a cheaper option who’s still very usable from the start, Octavian Popescu is a more traditional winger, but has good speed, dribbling, and stamina despite being just 18 years old. What’s more, with 85 potential and a relatively cheap price tag, his value will increase very quickly alongside his skills.

Pedro De la Vega – Atlético Lanús – £10m Value – 20 – Another highly rated Argentine, Pedro De la Vega has better starting stats than his 74 overall might suggest, and they’ll only get better as he grows into a starting potential of 86.

Ibrahima Ndiaye – FC Luzern – £4.2m Value – 22 – With awesome stats for the price, Ibrahima Ndiaye boasts 90+ pace, nearly 80 dribbling, and mid 70s stamina for a relatively cheap fee. While his 80 potential is lower than a lot of future talents, it’s still a +9 potential growth, and it only keeps his value down and more affordable for a wider variety of clubs.

Stefan Baiaram – Universitatea Craiova – £1.7m Value – 18 – For a cheaper option who still has usable pace and stamina, check out this prospect from the Romanian league. With mid 80s pace and mid 70s stamina, he has 80 potential to improve his technical skills.

Now that your attack is sorted, check out the best FIFA 22 defenders to sign in Career Mode, as well as the best goalkeepers in FIFA 22.

Or to support either your offense or defence, here are FIFA 22’s best CAMs, CDMs, and central midfielders.