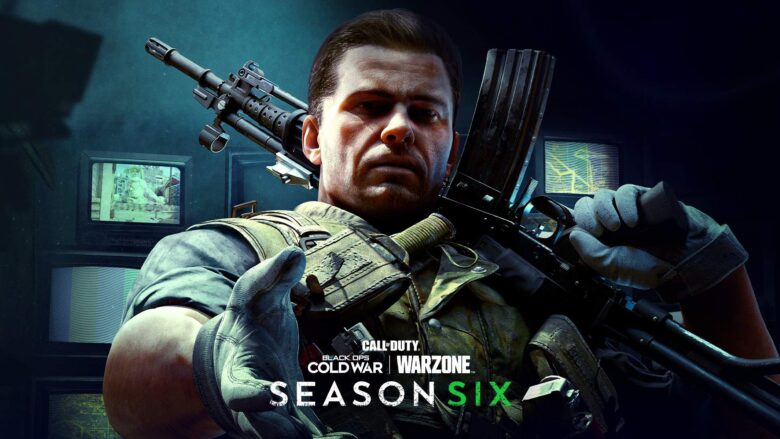 In the ongoing battle against Perseus, one man’s fate is irrevocably changed: Russell Adler. After being captured and interrogated by his longtime adversary Stitch, followed by the mind-altering Numbers broadcast, he finally seems to have broken down. Now Adler is AWOL, and the final showdown begins.

Season Six of Call of Duty: Black Ops Cold War and Warzone is available now for the Xbox One and Xbox Series X|S. Read on for the latest.

Stadium and Downtown Leveled in Verdansk

The final showdown approaches, and we need all Operators in the area ASAP. Adler’s gone AWOL, and seismic devices near old WWII-era bunkers have triggered a massive explosion downtown.

The Old Verdansk Stadium has collapsed, opening new lines of sight and greater maneuverability in the rubble. Downtown has also been hit, its buildings toppling into the fissure. Snipers will need to compete over the remaining perches, and both areas should be explored to the fullest.

New Points of Interest and a New Gulag

Get a peek at what’s coming to Warzone in Call of Duty: Vanguard by descending into the World War II–era bunkers now revealed on the map. What could possibly be hidden within?

If you’re eliminated while exploring the bunkers and downtown destruction, you’ll have to fight it out in a new Gulag, inspired by the original 1v1 map in Verdansk 2019. Taking place deep in the Zordaya Prison Complex, expect some twists to the original layout.

Unlock three more weapons — the dual-wield Hammer and Sickle, the two-handed Battle Axe, and the LAPA SMG — by completing in-game challenges or by purchasing their corresponding bundles in the Store when they arrive later in the Season.

With the Forsaken now set loose, and rumors of a Project Janus circulating Requiem, there’s no telling what you’ll encounter in the final chapter. Whatever it is, our agents will have to put their lives on the line if they hope to end Omega Group once and for all.

Hot on the heels of the series-favorite PhD Flopper Perk comes the new and enhanced PhD Slider. Consume this gnarly beverage to trigger an explosion when sliding into enemies, with the size and damage of the explosion increasing the farther you slide before impact. Spend Aetherium Crystals to upgrade it even more, gaining immunity to self-inflicted explosive damage and triggering blasts when you hit the ground from up high.

Mow down the horde with the new Chrysalax Wonder Weapon within Forsaken’s main Easter Egg. Much like what lies beneath Forsaken, there is more to this Wonder Weapon than meets the eye. And when you still don’t have quite enough firepower, hit up the Crafting Table to purchase the new hard-hitting Hand Cannon and ARC-XD Support weapons.

Halloween is just around the corner, and horror movie buffs should be especially excited for the Halloween Event spectacular starting October 19. Stay tuned for more info.

Haven’t yet joined the fight? Get Black Ops Cold War on the Xbox Store, and experience Season Six today!

Buy this digital Xbox One version of Call of Duty®: Black Ops Cold War from the Microsoft Store and download the Xbox Series X|S version at no extra cost.

Black Ops Cold War will drop fans into the depths of the Cold War’s volatile geopolitical battle of the early 1980s. Nothing is ever as it seems in a gripping single-player Campaign, where players will come face-to-face with historical figures and hard truths, as they battle around the globe through iconic locales like East Berlin, Vietnam, Turkey, Soviet KGB headquarters and more.

As elite operatives, you will follow the trail of a shadowy figure named Perseus who is on a mission to destabilize the global balance of power and change the course of history. Descend into the dark center of this global conspiracy alongside iconic characters Woods, Mason and Hudson and a new cast of Operatives attempting to stop a plot decades in the making.

Beyond the Campaign, players will bring a Cold War arsenal of weapons and equipment into the next generation of Multiplayer and Zombies experiences.

Welcome to the brink. Welcome to Call of Duty®: Black Ops Cold War.

The Call of Duty®: Vanguard Ultimate Edition includes the Xbox One and Xbox Series X|S versions of the game.

The Ultimate Edition – loaded with bonus content for the ultimate fan.

Rise on every front: Dogfight over the Pacific, airdrop over France, defend Stalingrad with a sniper’s precision and blast through advancing forces in North Africa. The Call of Duty® franchise returns with Call of Duty®: Vanguard, developed by Sledgehammer Games, where players will be immersed in visceral WWII combat on an unprecedented global scale.

Call of Duty®: Vanguard will also usher in a new and unparalleled Call of Duty®: Warzone™ integration post launch, and feature cross-progression and cross-generation play, in addition to a massive calendar of free post-launch content that adds in new Multiplayer maps, modes, seasonal events, community celebrations and more.


*Offer content and availability may vary by region and is subject to change. Call of Duty®: Black Ops Cold War/Call of Duty®: Warzone™ on Xbox One or Xbox Series X|S required to redeem offer, sold/downloaded separately. Must be redeemed by November 5th 2022.

**Battle Pass and Tier Skips will be accessible in Call of Duty®: Vanguard once the Season 1 Battle Pass is made available in game. Battle Pass redemption applies to one season of Vanguard Battle Pass only.