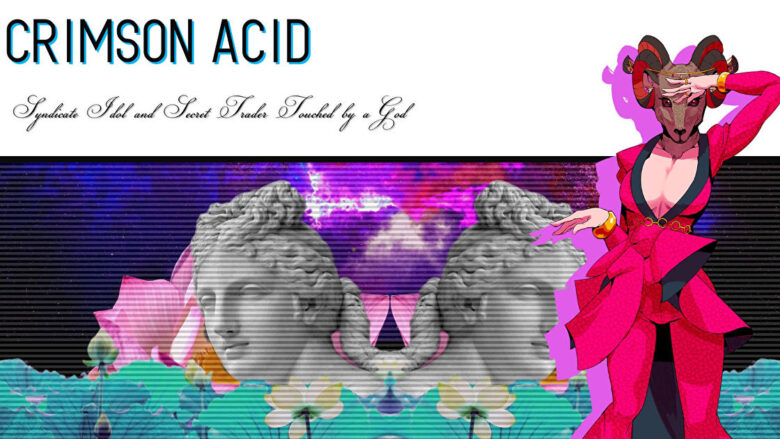 Today is another Bandcamp Friday, when the splendid DRM-free music shop waive their cut of sales to give artists more money. It’s a good time to buy music from a good place but a bit overwhelming when the store is so big. Last month, I had some slightly esoteric game music recommendations of my own. This month, I’ve had everyone in the RPS treehouse recommend a huge spread of video game soundtracks and music on Bandcamp, from Paradise Killer to Skyrim covers. Come, see what we’re hearing!

Paradise Killer has a lot to recommend it, since it’s a kind of futuristic demon murder-mystery on an eternal island paradise powered by human sacrifice. But you know what else is great? The soundtrack. God, the soundtrack. Paradise Killer’s OST is by Barry ‘Epoch’ Topping and it’s just hit after hit after hit. A cosmic mix of jazz, funk, synth and pop. A crashing wave of euphoria. I love it, especially. the opening track Paradise (Stay Forever), which kicks in just as you launch yourself into freefall of hundreds of feet.


I reckon loads of people think of the cool Skyrim song from the first trailer. I’m really into this cover by Malukah, part of a whole album of Skyrim covers. They’re a bit like the kind of soulful, acoustic covers you’d hear from a girl in a turning up at open mic night in a maxi skirt and doing an “unplugged” version of Bad Romance, but Malukah does lovely, heart-swooping layering of her voice and imbues it all with a sweet sadness. It’s the kind of lovely melancholy you want from songs written by people freezing their arse off on a cold mountain, terrified they’re going to be eaten by a dragon.

As well as being one of the best-looking video games, Hylics 2 is one of the best-sounding. Warbling vibes, psyhedelic funk, grinding chords, just some good weird times.


The Path came out when I was on a real Jarboe and Swans kick, so to hear her wailing, whispering and howling on the soundtrack (made with Kris Force) was a real joy for me. It’s still great. I bought the CD version years back, which came with tied with a red lace ribbon to a black mesh bag containing pot pourri, charms, and a plastic wolf. Perfect.


Disclosure: I later ended up staying with Tale of Tales one night while travelling with a friend? Man the beforetimes seem so weird now.

I’d imagine there’ll be a few Supergiant soundtracks on here, so I’m gonna try and pick the one I’m guessing fewer people will pick: the Pyre soundtrack. Prior to doing Hades, composer Darren Korb did two other excellent soundtracks for Bastion and Transistor, but both definitely had a sound. One was littered with twangy guitars, the other was infused with electronica. It’s almost hard to pin down what genre Pyre falls into. Thrash Pack is punk as fuck, the fat horns of Snake Soul are a delight, and Surviving Exile sounds like something Lindsey Buckingham played for the rest of the gang during the recording of Rumours. Yes, there are big fantasy rock vibes throughout the album, but the infusion of other elements makes it stand out. A terrific listen.

A Short Hike’s soundtrack is like a Glade air freshener for your ear drums. Soothing and summery and wafts about your person after you’ve had a listen. Guaranteed to cheer you up, this.


Forza Horizon 4 has a delectable selection of boots and cats to complement your drive.

I took a trip back to one of my favourite indies, Guacamelee, for this. A riveting adventure through the Land of the Dead, there’s a lot to love here. Whether you want thrilling combat, a fun platformer, or a colourful Day of the Dead celebration, Guacemelee has you covered. The soundtrack, however, is a special treat. The whole album deserves a listen, but if you can only buy a few tracks, I recommend grabbing both versions of Caverna del Pollo (standard and world of the dead) – a great insight into the parallel worlds you explore throughout the game. Oh, and it’s Hispanic Heritage Month, so go celebrate Mexican culture (and play Guacamelee 1 and 2)!

Everyone raves about the entire Hollow Knight soundtrack, because it is an absolute delight, and if you still haven’t taken the plunge, please let me entice you to one specific song that you need. Go and buy Greenpath, whack on your phone/MP3 player/whatever, and go for a stroll in your nearest local nature place. Gardens, forests, reserves – it doesn’t matter. Exist with nature and pretend you’re a magical being exploring a mysterious wilderness. It’s such a beautiful track, everytime I get to this area in Hollow Knight I have to stop to take it all in for a bit. While game music is often just made for background stuff, I get so much joy from actively listening to Hollow Knight’s OST. There’s so much atmosphere, and it gives me so many feelings. Anyway, buy Greenpath.


The Sunless Skies soundtrack makes me feel like a cold, lost traveller. I mean, that’s exactly what I am when I play it, but there’s something about its songs that are incredibly haunting even when I’m not in a virtual skyfaring locomotive.


Most of Supergiant’s games have absolutley banging OSTs (thanks to the very talented Darren Korb), but Hades stands out to me because of how wildy varied it is. One moment you’re stressed off your head fighting monsters with metal and rock blaring at you, the next you’re listening to gorgeous and serene singing from two forlorn souls. Good Riddance is such a lovely tune, it actually inspired me to pick up my old guitar for the first time in years to try learning it.

Super Meat Boy put me off “hard for the sake of it” games for life, but I have a lot of time for its infectious, synthy soundtrack. Especially track 3, which over a decade later still manages to evoke the earlier levels’ sense of determination and purpose, prior to circular saw blade death #345,076 snuffing it out.


Firewatch score is a collection of simple and melancholic, but ultimately very pretty BGM tracks; lo-fi beats to intentionally seclude yourself in the American wilderness to, perhaps. Also, just look at that album art. How clever is that. Man.

The original soundtrack for Chicory: A Colorful Tale (also available on Bandcamp) is a sumptuous and joyous collection of music, but Lena Raine’s The Sounds Of Picnic Province is Chicory as you’ve never heard it before. This seamless, mood piece album is all about the vibes, maaaan, and it remixes Chicory’s best tracks into a cosy 44 minutes of continuous, low-key loveliness. It’s the perfect thing to have on in the background on a rainy afternoon or while you’re working, and it’s hands down one of my favourite video game soundtrack albums to have come out so far this year.

Every time I listen to the opening notes of Old Friends, I’m transported simultaneously to two very different times and places. One is the gorgeous and haunting world of Transistor, one of my favourite game worlds ever. The other is university, and playing it for the first time amid all the stress and boredom and pressure of my degree, and feeling it all melt away for a few short hours as I got to experience one of Supergiant’s masterpieces for the first time.

A surreal, dreamlike electronica track with a pulsing techno beat should feel out of place in a game about an 8th century Pictish warrior taking on Viking gods, but somehow this one just works. Passarella Death Squad’s Just Like Sleep featured on the soundtrack to Hellblade: Senua’s Sacrifice, and I’ve yet to hear a better song in a final boss battle. I loved Hellblade, but some of the more gruelling depictions of Senua’s experiences were close enough to the bone to set off my own panic attacks. Finally reaching the end and hearing this song playing over that final confrontation — the point at which Senua (and you) has realised that there’s almost certainly no way to reach the goal she’s been pursuing, but that she can still carry on in the face of pain and loss — gave me literal goosebumps, and the whole fight was one of the most curiously uplifting no-win scenarios I’ve ever faced in a video game.

This music is best enjoyed while cathartically bashing endlessly respawning mini-bosses with a sword in a last-ditch effort to resurrect your dead lover, obviously, but I’m pleased to confirm that the song stands up very well on its own merits too. It’s available on Bandcamp on a double A-side with the similarly trancelike “Anthem”, which is also well worth a listen.


Music plays a key role in setting the stage in most games, but it takes on a particular narrative importance in a game with no spoken or written dialogue. Such a game is Journey, and Austin Wintory’s original score is one of my favourite video game soundtracks of all time. Every one of its 18 tracks is worth a listen, but my personal pick has to be the end credits song “I Was Born For This”. Featuring the only human voice in the game, the lyrics are pieced together quotes from Beowulf, The Iliad and The Aeneid, the poetry of Matsuo Bash&omacr;, and words attributed to Joan of Arc — all sung in their original languages — which express the key themes of the story through timeless quotations about the inevitability of endings and the strength to face your destiny. It’s one of the most truly moving songs I’ve ever heard, and I honestly don’t think I’ve ever seen anyone get through the end of this game without having at least a little bit of a weep. (Even if, like me, they didn’t really understand the actual lyrics until they read a translation online.)


The Lion’s Roar by First Aid Kit is an important album if you’ve very very extremely into both late-2010s story-rich adventure games and alternative folk rock… so, okay, it might be just me who thinks this is an album for gaming aficionados, but I promise it’s good music. The song I Found A Way features on the soundtrack to Life Is Strange 2, where it’s first covered in-game in Episode 2 by honey-voiced and potentially-romanceable guitarist Cassidy, before phasing into the original song for the closing credits. I think LIS2 has the best soundtrack in the franchise (up against some pretty stiff competition from… every other LIS game, let’s be real), and depending on the day, I Found A Way might be my favourite song on it. Plus if you can get hold of the bonus track Wolf (sadly not included on Bandcamp), you’ll also be treated to the song that played over the closing credits of Telltale’s The Walking Dead: Michonne. Yep, First Aid Kit are basically royalty if your nerdy interests rest at the exact specific intersection mine do.


Bandcamp Friday started during the pandemic, with every first Friday of each month declared a special day for buying music. The store doesn’t take a ct on Bandcamp Fridays so artists earn more (though a share still goes to payment processors) and it’s just a good time to get some new tunes.

Which other game music would you folks pick up recommend, gang?