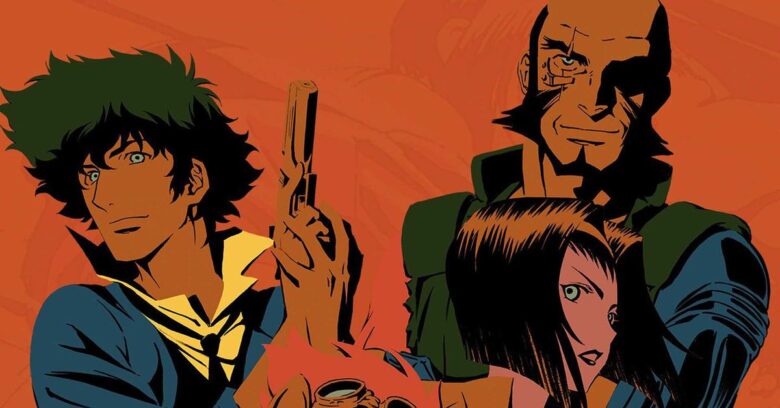 This November, Netflix will unveil its long-gestating, live-action adaptation of the Cowboy Bebop anime. And if the opening credits sequence, which premiered during Netflix’s Tudum fan event in September, is any indication, the show will introduce audiences new and old to John Cho, Mustafa Shakir, and Daniella Pineda’s mirror renditions of Spike Spiegel, Jet Black, and Faye Valentine, along with a host of supporting characters.

Premiering on Japanese television in 1998 before airing in the West during the late-night animation block Adult Swim in 2001, Cowboy Bebop is regarded as a cross-cultural milestone in the history of Japanese animation. The sci-fi neo-noir series directed by Shinichirō Watanabe centers on the misadventures of a band of bounty hunters with an infectious soundtrack that combined jazz numbers with scintillating rock ballads and melancholic acoustic guitars. The original 26-episode series is hallowed ground for a generation of anime fans who came of age around the turn of the century, and has been widely hailed as one of the definitive gateway titles to the medium of anime.

Replicating the distinctive visuals of the series’ iconic opening title sequence with a new orchestration of composer Yoko Kanno’s theme song “Tank!,” the live-action series’ title trailer dropped several tantalizing visuals of some of the original anime’s most memorable characters and storylines. Poring across the trailer with eagle-eyed attention, we’ve come up with a list of eight must-see episodes of the original anime series that you should watch before the live-action adaptation premieres on Nov. 16. Then again, you could always just watch the series in its entirety; it’s still amazing even after all these years, and streaming on Funimation, Hulu, and on Netflix starting Oct. 21.

“Asteroid Blues,” the first episode of the original Cowboy Bebop anime, is alluded to with the appearance of Asimov and Katerina Solensan, a couple fleeing an unnamed crime syndicate after stealing an experimental performance-enhancing drug called “Bloody Eye.” Looking to sell enough of the new drug to their contacts on the asteroid of Tijuana (aka “TJ”), the pair inevitably cross paths with bounty hunter Spike Spiegel and his partner Jet Black as they flee to Mars in hopes of starting a new life. Asimov’s proclivity for violence, exacerbated by his personal use of Bloody Eye, drives a wedge between him and his wife Katerina, who wants to do only what is necessary to build a better life. It’s unknown how early in the live-action series the pair will make their appearance, but given that their bounty in the series isn’t a particularly high one, one imagines they’ll be introduced relatively early on. As for the episode itself, “Asteroid Blues” is an excellent introduction to the universe of Cowboy Bebop and series’ lead characters Spike Spiegel and Jet Black, establishing the series’ characteristic blend of suspense, intrigue, and action.

The menacing-looking woman in the floppy hat flanked by gas mask-wearing gunmen is Maria Murdock, the leader of an extremist animal rights group in the fourth episode of the series, “Gateway Shuffle.” Murdock, being a noted criminal with a substantial bounty on her head, is taken in by Spike and Jet after she and her underlings inadvertently kill the target they had originally been tracking. As calculating as she is deranged, Murdock makes for a dangerous enemy for the Bebop crew whose ambitions are nothing short of cataclysmic. “Gateway Shuffle” is perhaps best remembered by fans of the series for for its pulse-pounding finale where Spike and Faye Valentine, aboard their respective ships Swordfish II and the Red Tail, desperately attempt to shoot down a barrage virus-touting missiles launched by Murdock before beating a hasty escape through a hyperspace gate only seconds away from closing. That kind of last-ditch, last-minute victory is what cements the Bebop crew as the kind of protagonists you want to root for. They may be losers, but they get the job done.

The image of Spike Spiegel locked in a deadly draw with his former friend-now-nemesis Vicious illuminated against a stained glass window, as seen in the fifth episode “Ballad of Fallen Angels,” ranks easily one of the most striking iconic shots from the original anime. The episode is known primarily for introducing Vicious, a ruthless member of the Red Dragon Syndicate and Spike’s former friend, and for offering some of the first glimpses of Spike’s past before he teamed up with Jet and became a bounty hunter.

Mason Alexander Park, a non-binary actor known for their role in the National Broadway Tour of Hedwig and the Angry Inch, plays the character of Gren in the live-action adaptation of Cowboy Bebop i, and is briefly seen brandishing two pistols from behind a nightclub bar in the trailer. As seen in the two-part episode “Jupiter Jazz,” Gren is a saxophone player for a bar on the moon of Callisto who previously fought in a war on the moon of Titan alongside Vicious, Spike’s nemesis and the series’ antagonist. Gren was implicated as a spy by Vicious and sentenced to prison. Unable to cope with the idea that his former comrade betrayed and falsely accused him, Gren agreed to an experimental drug treatment to calm himself down, only to grow breasts as an unintended side effect of the treatment. When his secret is discovered by Faye who confronts him about his gender, Gren replies, “I’m both at once and neither one.” Speaking of their role, Park describes their rendition of Gren as, “a Bowie-esque embodiment of 22nd century handsome and seductive beauty.”

“Jupiter Jazz” represents a turning point for Spike, Jet, and Faye; forming a rift between the trio that sets each of them out on their own journeys across Callisto before bringing back together in a way that clarifies how these lonely, broken people ever found each other in the first place.

The guy with the afro doing cartwheels and karate stances is Shaft (no, not that Shaft), a bounty hunter who features prominently in the 17th episode. “Mushroom Samba” is one of the few episodes in the original series to prominently center on Ed, the kid prodigy hacker who finagles her way aboard the Bebop, and Ein, the “data dog” that Spike and Jet rescue at the end of “Stray Dog Strut,” the second episode of the series. We haven’t seen hide nor hair of the live-action series’ rendition of the Ed character — we don’t even know the actor who plays them, let alone whether they show up in the season at all. But the appearance of a one-off character known entirely for his role in an Ed-centric episode is a promising hint that we may not have to wait long for the character’s introduction. “Mushroom Samba” is a hilarious mash-up of cartoon slapstick meets loving Blaxploitation homage that transforms a low-stakes bounty into an exhilaratingly madcap chase across the desert plains of Io.

The ghoulish pale-faced figure seen wearing a top hat and a Victorian neck ruffle is the psychic assassin “Mad Pierrot” Tongpu, who appears in “Pierrot Le Fou,” the 20th episode of the original Cowboy Bebop anime. The episode opens with the mysterious Tongpu floating above a nondescript Martian city before descending on his target and his entourage of bodyguards, pelting their armored vehicle with bullets fired from the base of his cane. Tongpu isn’t even a bounty target in the episode, but when Spike inadvertently crosses paths with the assassin after an innocuous night out shooting pool, he becomes the killer’s newest fixation and only narrowly manages to escape with his life. One of the few episodes of the show that dabbles in outright horror, “Mad Pierrot” is an iconic episode for its fierce cat-and-mouse climax wherein Spike and Tongpu engage in a cat-and-mouse fight across an abandoned amusement park called Space Land.

The guy with the giant Teddy Bear mask and the smiley-face bomb detonator is an allusion to the 22nd episode of Cowboy Bebop, “Cowboy Funk.” The episode opens with Spike about nab Ted Bower, an anti-capitalist terrorist who goes by the pseudonym “Teddy Bomber,” before being interrupted by Andy; a rich, oafish, and stubbornly egocentric bounty hunter who fully commits to the “cowboy” bit of being a bounty hunter, white stallion and all. Andy confuses Spike for the Teddy Bomber, thus sparking an episode-long feud between the two as they continually spare while attempting to collect the real Teddy Bomber’s bounty. It’s comical for the fact that despite ostensibly being the antagonist of the episode, Ted is more or less treated as an afterthought — a fact which irritates almost as much as being interrupted during his long-winded speeches.

The stack of televisions that look like a Nam June Paik art exhibit are a visual reference to “Brain Scratch,” the 23rd episode of Cowboy Bebop, in which Faye, unbeknownst to rest of the Bebop crew, goes undercover as an acolyte of the doomsday cyber-cult SCRATCH. The group’s led by the elusive Dr. Londes, a sinister self-help guru who basically boils down to a cross between Heavens Gate founder Marshall “Do” Applewhite meets Dr. Brian O’Blivion from 1983’s Videodrome. After catching wind of Faye’s plot to collect the bounty on Londes, Spike ventures on-foot to rescue Faye as Jet and Ed use a new VR-game headset to track down clues to Londes’ whereabouts in hopes of nabbing him. It’s a fun, albeit very freaky episode, one that taps into the same zeitgeist of turn-of-the-century tech anxiety as similar anime of its time like 1998’s Serial Experiments Lain.