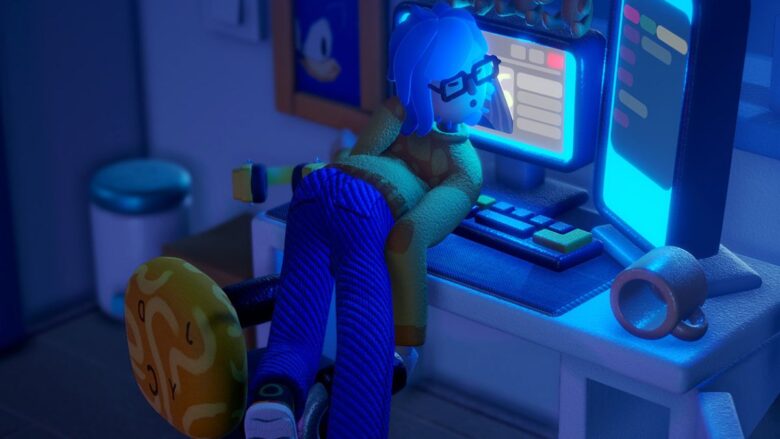 Steam Next Fest is now underway, and just like the event back in June there are hundreds (that’s no exaggeration, hundreds) of free demos for upcoming games you can download and try out right now.

Most of the Steam Next Fest demos will only be available from October 1 to October 7, so if you want a free peek at some cool looking games, you’ve only got a small window. The week will be gone before you know it, so get downloading and play some free stuff.

With so many choices it can be hard to know where to begin, so we here at PC Gamer played a bunch of them and listed a dozen or so below that we think really stand out. Have a look, and lets us know if you play anything cool this week. We’d be happy to expand our list with some of your favorites.

The Exo One demo is like nothing like I have ever played before. It’s a sci-fi exploration game where you control a weird shape-shifting spacecraft hurtling through various alien worlds in search of a team of astronauts who have sent out a distress signal. Using the power of momentum, the spaceship can transform as it travels across planets. It can transform into a ball that zips across the ground to pick up speed and then when launched into the air, it can transform into a flat disc to glide. The demo gives us a look at three strange worlds, all of them packed with extraordinary encounters, from desolate wastelands filled with alien structures to raging seas with no land in sight. The Exo One demo has been around for a while but still remains an exciting sneak peek into both a serene and exhilarating adventure.—Rachel

The demo covers only the first two days of this shopkeeping puzzle sim, and that is not nearly long enough because it’s very, very good. In Strange Horticulture you run a quiet little plant shop where strange visitors will drop by with unusual requests. Use your ever-growing tome of knowledge to carefully identify and label plants based on clues, give your customers what they’re looking for, and explore a map using cryptic hints to discover more unusual flora. Don’t forget to pet your black cat, and try not to lose your mind or you’ll literally have to piece it back together. I am excited to see more of this when it launches in 2022.—Chris

Hearthstone takes place in a jolly tavern. Inscryption does not. This card game’s backdrop is a dark cabin, and my opponent a pair of eyes in the shadows. “PLAY THE SQUIRREL CARD,” it says with more menace than the words deserve. The squirrel can’t attack, its only value is that it can be sacrificed for a point of blood. Blood (and later bones) are necessary to play better cards, like the adder. Unlike Hearthstone or Hand of Fate, which it also resembles, Inscryption’s theme is frontier America, all canyons and gulches, and my hand is full of wolves and a stoat. The text on the stoat card changes. “Play along for now,” it says, and then things get weirder. Inscryption is the work of Daniel Mullins Games, creator of metatextual headfucks Pony Island and The Hex, and it promises to do to cosy collectible card games what Pony Island did to the endless runner—making it so eerie and unsettling it’ll jangle your nerves and rattle your bones.—Jody

A competent Starship Troopers RTS in 2022? Confounding. Well, I’m not gonna think about the likelihood of this too hard—it’s just neat to be playing an RTS game that gives me early 2000s vibes, in mostly good ways. Starship Troopers: Terran Command doesn’t feel too much like my favorite RTS series, Command & Conquer, because you’re mostly commanding troops here rather than building bases. But it’s a good fit for Starship Troopers, throwing your squads of meatheads up against piles of alien bugs. There’s a bit more depth to the combat than I expected: I had to carefully position my troops for clear lines of fire, which got extra tricky when I recruited a few flamethrower boys who relish being on the front lines. Company of Heroes 3 is next year’s big flashy RTS, but it’s nice to see some little guys out there helping keep the genre alive.—Wes

Motor Town: Behind the Wheel

If you’re looking for a deep driving sim that won’t melt your GPU like Forza, then climb into Motor Town and buckle up. And don’t let the chunky graphics fool you, it’s a pretty deep sim with realistic physics, a day and night cycle, progression, and lots of vehicles to drive and missions to complete. Ferry passengers around in a taxi or bus, haul cargo in a truck or trailer, refuel, replace parts, or just pick up hitchhikers in your personal vehicle. You can use turn signals, headlights and highbeams, and honk your horn, and the cops will even chase you if you’re breaking the rules of the road. And unlike a lot of car games, you can get out of your car, walk around, and even sleep in your house to fast-forward the clock. There’s a lot of entertainment packed into this demo, and there’s a beta you can sign up for too. —Chris

In the spirit of Inside and Limbo, Airhead is a surreal and intriguing platformer puzzler and I have very little idea of what is going on in it. In a good way! I know this: I have no head, and after running, jumping, and pushing chunks of stone around a strange cavern for a while, I got a head when a weird machine burst through a wall and squashed a blob with a rock. But my blobby new head needs to breathe, so I refill it with air using these little tanks scattered around which also serve as save points. Also, I have to hold my new head in my hands, which means I sometimes need to drop it on the ground to clamber around or push and pull things. Look, Airhead is weird. But it’s neat. And despite only just having got a new blobby detachable head I am very determined to keep it safe.—Chris

An isometric exploration game reminiscent of Hob, Tunic follows the adventures of a small fox in a big world filled with danger, secrets, and treasure. It’s undeniably cute, but don’t expect to be making a lot of friends: Every one of the bouncy, mostly blob-like creatures I encountered in the world were determined to kick my ass (and a few succeeded). That’s at least in part due to the fact that I was defending myself with a stick, although the situation improved considerably when I found a sword, which also enabled me to hack new paths through the foliage, opening the door to all sorts of new areas and treasures. I only got a small glimpse of the game world, but I very much dig it. One note, and I say this as someone who loathes controllers: Play with a controller. Keyboard controls are supported (no mouse), but the movement and combat are clearly designed for thumbs and buttons.—Andy

Imagine Condemned: Criminal Origins, minus the horror and set in a cartoon gangster world filled with damsels in distress, grizzled tough guys, and old-time superheroes. That’s Fallen Aces, a two-fisted first-person Raymond Chandler comic book, minus the racism but overflowing with wonderfully stereotypical dialog and ridiculous violence complete with Mortal Kombat-esque punch-outs. It’s not an all-out brawl—there’s some light stealth that enables a quieter approach to problem-solving, if that’s your thing—but I was having too much fun kicking ass (and, in the end, getting my ass kicked) to spend much time figuring out the subtleties. I smashed a man in the balls with a bottle and then roundhouse-kicked him into a brick wall—who wants to sneak around when you can do that? I’ve been looking forward to Fallen Aces ever since it was announced, and after playing the demo my expectations are even higher.—Andy

The demo for Exhausted Man made me laugh for real a couple times. It’s not as fun as Stilt Fella, another QWOP-inspired game about coordinating unruly limbs, but it gets more comedy out of its premise and animation rigging—the way its very sleepy protagonist moves like an inchworm up walls and twists up like a towel when he tries to turn over. It’s also deeply weird, like in a genuinely unsettling way: Act 1 is called “‘It’ is coming,” there’s a red poster that just says “DIE” on it, and after completing a task called “Meditation,” the camera zoomed in on the protagonist’s hand on top of the poster and he thought, “The DIE by my hand arouses my thoughts of her.” Later, I rescued a tissue box “from the devil’s hand,” and noted that, after speaking at length to a lamp, “it only replied ‘Impossible.'” It’s like reading Zen kōan from the year 2666. I haven’t finished the demo yet… I wonder what household object the devil tempts next?—Tyler

Kaiju Wars is a turn-based strategy game with giant monsters who stomp on buildings and has the aesthetics of an old-school manga. That pretty much already sold me on the game. The demo has you play through a handful of stages as the Mayor of Floatio City, a place with the unfortunate luck of being a gathering place for all sorts of menacing Kaiju. As Mayor you need to secure up defenses by deploying tanks and bombers in order to scare off the Kaiju. Each turn you’re rewarded with money for every building that’s still standing, used to build more bases and buy more troops. You realize the trick to the game is luring the monsters away from civilian buildings by sacrificing your troops and doing enough damage to kill the damn thing or hoping it gets bored and runs away. Like Into The Breach, you know exactly where the monster is going and are forced to plan accordingly. It also just looks neat, and in later levels you fight with giant mecha and lasers which is icing on the cake. A huge monster cake.
—Jorge

There is no shortage of retro revival FPSes hitting Steam nowadays, and so far, Forgive Me Father is one of the better ones. It’s got keys that open doors, zombies that explode into buckets of blood at the roar of your double-barreled shotgun, and secret paths that lead to bonuses. The crisp art and thick black outlines around everything reminded me a lot of Fallen Aces (there’s even an easter egg for that game in the first room of the demo), but Forgive Me Father is less Thief and more classic Wolfenstein, maybe to a fault. The guns feel pretty good, but I was a little put off by the endless narrow hallways at the start of the demo. Even though I wasn’t missing any shots, it was surprisingly easy to get cornered by a horde and die.—Morgan

“You think you’re God because you went shopping?” Part of the reason Ikea guy (comedian Scott Seiss) went viral with his clips of him angrily talking back to annoying customers is that so many of us have been there. Retail. It’s a nightmare. Negative Nancy can feel pretty cathartic as a result. Working the counter at the hellish Megamart, all you can say as Nancy is no. To rude and stubborn customers, to your team-building boss, to your frazzled coworkers. Granted, no isn’t always the best thing to say (you can also say nothing) and it won’t always get you what you want. But it still feels good. No, you can’t return that gift card that expired seven years ago. No, you can’t get a refund without a receipt. No, you can’t speak to the manager. No, no, no. No.—Chris