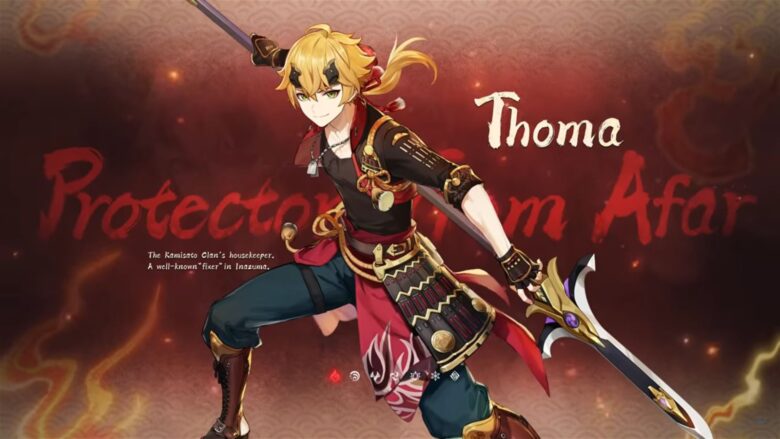 Want to learn how to create the best Thoma build in Genshin Impact? As the chief retainer of Inazuma’s Kamisato Clan, Mondstadt native Thoma is always down to lend a helping hand, even aiding the player in their arrival to Inazuma. It makes sense, then, that he’s a support and sub-DPS character similar to Zhongli.

This guide will show you how to create the best Thoma build in Genshin Impact. Below we’ll cover everything you need to know about Thoma, including wishing, weapons, artifacts, ascension materials, talents, abilities, and constellations.

Thoma’s best Polearm is the elusive Staff of Homa, which boosts CRIT DMG and increases its user’s HP by 20%. Thoma’s shield scales off of his HP, so any weapon that can increase his HP is a perfect fit for him. If you’re not building Thoma for his shield (or if you understandably can’t get the Staff of Homa), Wavebreaker’s Fin and The Catch both increase Thoma’s Elemental Burst DMG, which will prove helpful since Thoma’s Burst should be one of your priorities.

Thoma’s best artifact set is the Emblem of Severed Fate set, which can be obtained through the Momiji-Dyed Court domain in Inazuma. When used as a 4-piece set, Emblem of Severed Fate will boost Thoma’s Energy Recharge by 20% and increase his Elemental Burst DMG by 25% of his Energy Recharge. This set works excellently if you’re mainly utilizing Thoma’s Burst, though if you’re building him for his shield, you might want to try combining a 2-piece Emblem of Severed Fate with a 2-piece Tenacity of the Millelith, which can be obtained at the Ridge Watch domain between Mondstadt and Liyue and will increase Thoma’s HP by 25%. His shield scales off of his HP, so this added 25% bonus will help strengthen this ability.

If you’re building Thoma for his shield, stick with HP for any of his stats and substats whenever possible. Otherwise, mixing in Energy Recharge and Pyro DMG Bonus stats alongside HP will help give him a more balanced damage output.

Looking for Thoma’s ascension materials? Your best bet for obtaining Agnidus Agate is fighting the Pyro Hypostasis, as this boss will also drop the Smoldering Pearls you need. To find Fluorescent Fungi, head to Tsurumi Island in Inazuma. Finally, Insignias can be earned by fighting Treasure Hoarders around Teyvat.

Aside from obtaining Insignias by fighting Treasure Hoarders, finding materials for Thoma’s talents will require some daunting tasks. Transience Books can be won by completing the Violet Court domain in Inazuma on Mondays, Thursdays, and Sundays while Hellfire Butterflies can be obtained by completing the Narukami Island: Tenshukaku challenge. Finally, if you’re looking to fully level Thoma’s talents by crowning them, you can do so with Crowns of Insight, obtained through limited-time events or by making offerings to the Frostbearing Tree and the Sacred Sakura.

Similar to Zhongli, Thoma’s talent priority really depends on what you need most for your team. If you’re looking to add more Pyro DMG to your team, leveling Thoma’s Elemental Burst first will help increase the damage he does. On the other hand, if your other team members are taking damage frequently (this especially applies if you don’t have a healer like Barbara or Kokomi on your team), you might want to prioritize Thoma’s Elemental Skill, which provides a shield for your party while also dealing some Pyro DMG. Whatever you choose, Thoma’s Normal Attack should trail behind — as a support and sub-DPS, his Normal Attacks aren’t built for frequent use. Here’s everything Thoma has to offer:

Since you’ll be prioritizing Thoma’s Burst and Skill, earning any Constellation that increases those abilities is a great goal to have, and with Thoma’s 4-star rarity, earning his Constellations is relatively attainable as well. His Constellation 2 is especially powerful for this reason, as it increases the duration of his Elemental Burst by a hefty 3 seconds. Thoma’s Constellation 1 and Constellation 4 also increase the amount of uptime his Skill and Burst get, allowing him to help your team out more frequently with both Pyro DMG and shields. Almost any of his Constellations are viable picks, though, and if you’re doing a lot of wishing for Hu Tao, chances are, you’ll end up with one or more of the following:

How to get Thoma in Genshin Impact

Thoma is a 4-star character, meaning once version 2.3 is released, he’ll be available at any time. While he can be earned by wishing on any banner, your chances will be raised if he’s featured on a 5-star character’s banner with a boosted drop rate. Thoma is currently featured on Hu Tao’s banner, which lasts until Nov. 23, alongside fellow 4-stars Diona and Sayu.

If you’re planning on wishing for Thoma, check out our guide on getting characters to learn the best ways to prep, or our codes list to get some free Primogems!

That’s all the info we’ve got on Thoma! Why not check out our character tier list to see which other characters are good to wish for?