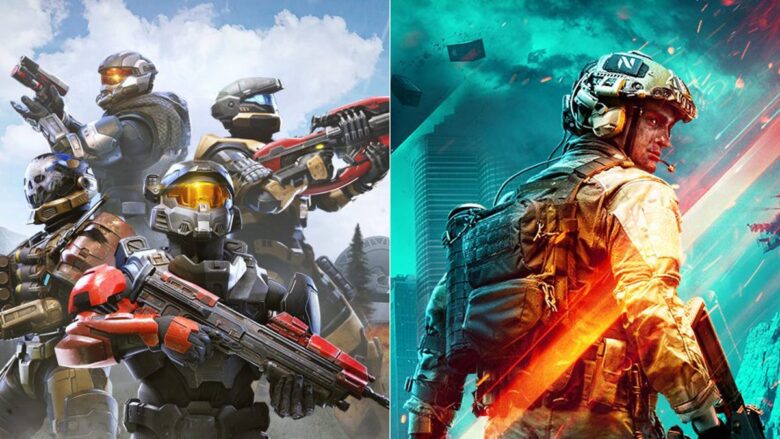 The holidays come a little early this year for fans of first-person shooters. On November 19, EA will publish Battlefield 2042, a game about how, in the wake of catastrophic climate change, we’ll still all shoot each other for scraps. That’s followed on December 8 by Halo Infinite, the sixth mainline entry in Microsoft’s flagship series of Xbox games about a tall dude named John. But if you could only rescue one from a fire, which should it be?

Both games have seen brief periods of playability by the public. Over three weekends this summer, developer 343 hosted “technical tests” (which we’re just gonna call betas for ease) for Halo Infinite. The first pitted players against unexpectedly lifelike bots, the second against other human players, and the third against twice as many other human players. Meanwhile, developer DICE opened up Battlefield 2042 in a public beta that was extra open to players who ponied up for certain monthly games-on-demand services. (You got two extra days of playtime.)

So, two massively anticipated first-person shooters. Two widely played testing periods that were available around the same time. Two release dates smack in the middle of the holiday rush. Obviously, comparisons need to be made.

Of course, despite both games broadly existing in the same genre, there’s a galaxy of difference between them. Halo scratches the itch for arena-style gameplay, while Battlefield falls more into the role of portraying big battles on big fields. But comparing things is fun as hell, so screw it, let’s do this.

First-person shooters live and die by their arsenals. These games are both worked on by hundreds if not thousands of talented developers, at some of the best-funded gaming companies on the planet. It’s not even remotely surprising to say that gunplay is stellar across the board here, that every weapon feels good to shoot (and sounds just as good).

But, at least based on what was available in these betas, Halo Infinite’s arsenal stands apart, all thanks to a suite of creative offerings: an instant-kill harpoon gun, a charge-up pistol that fires homing orbs of energy, a rapid-fire rifle that shoots a steady stream violet-colored needles. By comparison, Battlefield 2042’s guns…shoot bullets.

For its part, Battlefield has the unique gimmick of allowing players to customize their weapons on the fly. It’s extremely cool on paper—by pulling up a snazzy in-game menu, you can swap between scopes, grips, and clip sizes in the middle of conflict, rather than in the loadout screen—but maddeningly unintuitive in practice, with little direction as to how to use the feature. In fact, I spent my first few matches pulling up the menu of options while being flummoxed at how to make any changes, in all cases leading to my dying as I fecklessly pushed the D-pad in various directions. (Turns out, you use the face buttons to make changes?! Weird.) Perhaps once it’s trained into a player’s muscle memory, this’ll prove a decent inclusion, but for the beta it was just confusing.

Halo Infinite’s grappling hook (technical name: grappleshot) is a limited-use piece of equipment you may or may not come across over the course of a match. Battlefield 2042’s is tied to a brief cooldown, and you can spawn with it from the start.

It’s the story of every online game these days: not how well the game plays, but whether you can play it or not in the first place. Halo Infinite’s first beta, held on the shoulder weekend between July and August, sputtered out of the gate. Right before the test was slated to launch, 343 had to perform a “full global server re-deploy,” pushing the starting time back indefinitely. It took a full twelve hours for connectivity to open up across the board, and the test remained somewhat shaky throughout the following two days. (The second and third betas went off without a hitch.)

Battlefield 2042 had some hiccups (I personally had about 15 minutes of server failures when trying to boot up) but nothing nearly on the scale of Halo Infinite’s first weekend. Consider, too, the difference in circumstances. Halo was open to a limited number of invitees, and was available on just two platforms (Xbox and PC). Battlefield’s, meanwhile, was fully open to all players, and was playable on pretty much any platform that doesn’t rhyme with Wintendo Witch. Exact tallies aren’t publicly available yet for both betas, but one imagines the Battlefield test had a larger playerbase.

It’s apples and oranges, and further not totally fair to judge such metrics in the current state—testing server capacity is the very point of hosting these pre-release sessions—but, credit where it’s due, Battlefield’s beta weathered the player influx better. Let’s see how these stack up upon full release.

Look: It’s just not even a fair comparison. On PC and next-gen consoles, Battlefield 2042 can host up to 128 players in a single match. Each one of those players has hopes and dreams about the chaos they want to sow, and plenty of tools at their disposal to sow it. For every teammate who decides to commandeer one of your team’s two fighter jets, you’ll see two more piloting a small fleet of attack helicopters, turret-equipped jeeps, and freakin’ tanks. And thanks to the revamped gear system, anyone can spawn with a rocket launcher. Now couple all of that with the series’ long-standing destruction physics—explosives can tear down the walls of most structures instantly—and, yeah, whatever you’re picturing in your head is how most Battlefield beta matches played out. Also, at any point during the sole available map, a massive tornado could tear through the battle, sending debris and vehicles and players flying everywhere.

Yes, there’s constantly a firefight in Halo, but the general unpredictability of Battlefield—the notion that, at any given moment, you could get sucked up by a tornado, or have the charred remains of an exploded fighter jet land on your head—is unmatched.

Battlefield 2042’s beta went down on one map called Orbital. A fitting name, since it’s so large you’d need to be in orbit to see the entire thing. Some players gawk at this. Others, like me, bristle at the uniquely Battlefield experience of sprinting five minutes to get to the action only to immediately die when you get there—an experience that defines roughly half of any match on Orbital. Cool tornado, though.

Halo Infinite, on the other hand, came out swinging with not one but three maps. Recharge and Live Fire both featured tight spaces and several floors of verticality. Bazaar funneled players into an open area in the center with near nonstop action. For the second two betas, 343 introduced a fourth map, Behemoth, which—no exaggeration—may be one of the best-designed Halo multiplayer maps in series history: fully symmetrical, replete with jump pads and hoverbikes and a little area in the center that looks like the scene from Star Wars where Luke finds out who his real dad is (noooo). Then, during its third weekend, 343 added Fragmentation, which bore a strong resemblance to Valhalla, a fan-favorite map that first appeared in Halo 3.

By the end of its beta run, Halo featured two broad modes: arena (four vs. four) and big team battle (12 vs. 12). Both were playable in capture-the-flag, zone control, or typical deathmatch varieties. And you could choose whether or not you wanted to play against humans or against robots pretending to be humans.

Read More: Why Halo Infinite’s Bots Act So Much Like People

Officially, Battlefield 2042’s beta featured just one mode: Conquest, a zone-control mode. Unofficially, it had a second: Jump In The Tornado The Second It Appears And See What Happens. That mode played exactly how it sounds.

Halo Infinite’s beta did not have a tornado.

It’s all fun and games to make a big pros and cons list, but at the end of the day—brace yourself for a cowardly copout—both games are in a terrific state. Halo Infinite certainly plays with expectations more, bringing a much-needed shot to the arm for a series that’s been absent of any new entries for years. But some Battlefield fans have long craved a return to the modern, near-futuristic stylings of games like Battlefield 3 and 4, rather than the historically-inspired Battlefield V and 1. Battlefield 2042 offers exactly what those players want. We all win here.

If comparisons must be made, the biggest contrast in my mind will be one of availability. Yes, Battlefield 2042 is launching on more platforms, but it’s doing so as a premium-priced game with no campaign. Meanwhile, Halo Infinite’s multiplayer, polished and expansive and expensive-feeling as it is, will launch as a free-to-play standalone mode. That’s one hell of a selling point.

Going by the raw point tallies from a meaningless array of metrics that I decided based solely on arbitrary topics I wanted to write about, yeah, sure, Battlefield 2042 eked out a narrow 4–3 victory. But if you’ll allow me to make this entire exercise completely meaningless by imposing my own personal taste above all other petty considerations: When the Battlefield 2042 beta ended on Saturday, I’d had my fill. When the Halo beta wrapped up, I found myself thoroughly amped, ready to count down the days ‘til I could return to the battlefield.