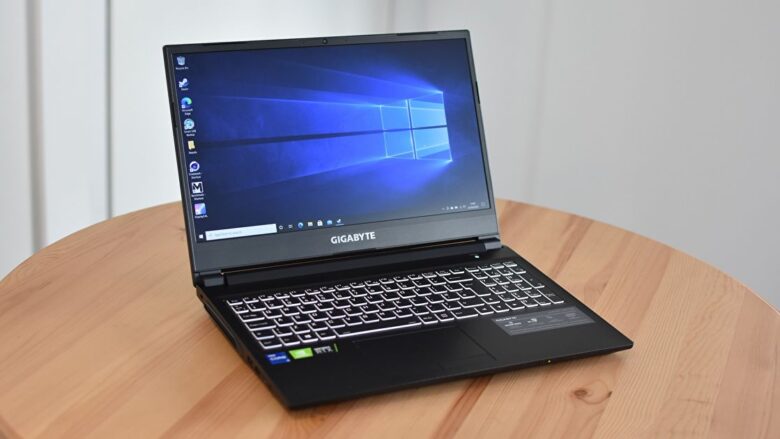 With graphics card prices being what they are, gaming laptops like the Gigabyte G5 have been making a lot more sense. Believe it or not, this particular model is – at £850 / $969 – one of the cheapest routes possible into a complete PC gaming system with Nvidia’s RTX ray tracing and DLSS powers.


Granted, you’re not exactly getting the RTX 3080, the RTX 3070 or anything else from the annals of the best graphics cards. The G5’s affordability cuts both ways, and that means a you get a RTX 3050 Ti: a GPU so modest Nvidia hasn’t even bothered to produce a desktop version. Still, that’s preferable to the absolute bottom-rung RTX 3050, and you’re also getting a capable hexa-core CPU in the Intel Core i5-11400H. Specs like 16GB of RAM and a 144Hz refresh rate on the 1080p screen also show that the G5 is aiming higher than entry level – but will its shots land?


Yeah, pretty much, they do. First off, Gigabyte has wisely gone for an understated look; whereas similarly-priced laptops like the Asus TUF Gaming F15 and Acer Nitro 5 lean heavily into show-off aesthetics, the G5 looks lot more grown up, with a straightforward all-black chassis and tasteful single-colour backlighting (you can change the hue, but I like the default: a light green so pale it might as well be white). It’s still making an effort to hide the cost-cutting that goes into making any sub-£1000 gaming laptop, but it does so by raising the build quality instead of the brightness of rainbow LEDs. Sure, the G5 is hewn from plastic rather than metal, but it feels sturdy, with zero creaking and only mild flexing on the display.


The keyboard itself, while forcing itself into narrower keys through the inclusion of a number pad, works well too. For a membrane keyboard it feels firm and taut, and the dinky spacebar aside, it’s laid out sensibly enough for easy typing. The trackpad is nice and responsive too, albeit accompanied by some cheap-feeling left/right click buttons. Stick to a mouse when you can, even outside of games.


The collection of ports is nothing special, though Gigabyte hasn’t skimped either. The right edge houses one USB 3.1, one USB-C (with DisplayPort output), and one coverless SD card slot apiece, while the left features one USB 2.0 port, one USB 3.1 port and the separated 3.5mm mic and headphone jacks. The power jack, Ethernet port, HDMI and Mini DisplayPort output are hidden away on the back. I’d have liked a few more of the side-mounted ports to have been relocated here as well, as periperhal and storage cables can get in the way of your mouse hand, but there’s an even bigger problem if you’re a southpaw: the left side exhaust vent is much wider than the one on the right, and will be much more prone to blasting your hand with hot air. The fans are noisy when doing so, too: 45 decibels, at max speed from normal sitting distance.


This, together with the weedy speakers and dark, blurry webcam, form a triumvirate of annoyances that make it impossible to give the G5’s design top marks. Nevertheless, it’s a good enough effort. At 2kg the G5 is even lighter than Gigabyte’s flagship Aero 15 laptop, despite being a full centimetre thicker, and the cooling system does at least manage to redirect heat away from the keyboard. The G5 is practically silent under light loads, too.


Also from the school of Flawed But Still Quite Good comes the display. It lacks G-Sync support and is ‘only’ 1920×1080, though the 15.6in form factor doesn’t stretch out pixel density too much, and the 144Hz refresh rate gives technically easygoing games a much smoother look than you’d get on a true budget, 60Hz screen. And, while the IPS panel does have a hint of ghosting to it, it comfortably outperforms other affordable gaming laptops we’ve tested. Take the G5’s sRGB gamut coverage of 85.7% – that’s not quite elite, but makes for a far more vibrant display than the likes of the Asus ROG Zephyrus M15 and ROG Zephyrus G GA502. A reasonably high contrast ratio of 1090:1 and a decent peak brightness of 306cd/m2 also help keep games looking more or less their best, and the 0.28cs/m2 black level is low enough to prevent dark scenes looking too grey.


Even so, it would be fair to wonder if the RTX 3050 Ti really has enough in it to fill out that refresh rate without knackering fidelity. Truth be told, consistently running games at the best settings is asking a bit much of the G5 and its internals, though as ever you don’t need the full 144fps for smooth performance. Shadow of the Tomb Raider demonstrates this aptly: averaging 79fps with the High quality preset and SMAA, it shows the RTX 3050 Ti is a marked improvement on last-gen laptop GPUs like the GTX 1650 Ti and GTX 1660 Ti. Unlike those GPUs, the RTX 3050 Ti also supports Nvidia’s RTX graphics options, so you can add Ultra-quality ray traced shadows and Shadow (heh) will still run at a playable 52fps on average.


Is this making the most of the display’s specs? Not really, but it’s nice that you can get both ray tracing and DLSS (and probably also DLAA, eventually) on a less devastatingly expensive laptop. Even the famously demanding Metro Exodus can just about handle a combination of the High preset and Normal quality ray tracing, provided DLSS is there to take the edge off. This pumped out a 46fps average, which again isn’t super fast, but is respectable enough for ostensibly lower-end hardware.


Outside of RTXland, Total War: Three Kingdom’s Battle benchmark produced 45fps on Ultra quality, so again it’s arguably better to drop down a step: on the High preset, that average jumped to 64fps. Final Fantasy XV mostly hovered around the 60fps region on its Highest setting, albeit with bells and whistles like TurfEffects and Hairworks snipped off, though despite a high of 67fps it could drop below 30fps when using effect-heavy moves in combat encounters. Dropping down to High provides much stronger grounding, as in the same scenarios I never saw FFXV dip below 53fps.


To see what the G5 could do with something easier, I also tested it with F1 2022’s built-in benchmark (using the Bahrain track). With maxed-ouT Ultra settings, ray tracing on High and DLSS engaged, F1 2022 raced to a smooth 111fps; however, it happens to have one of the uglier DLSS implementations I’ve seen, with some downright hideous blurring around the cars’ wheels. Switching to old-fashioned TAA ate a huge chunk of frames, but still ran nicely enough at a 70fps average. Still with ray tracing on, too.


That Core i5-11400H is also quite the brainy one. In Cinebench R20, its single-core score of 565 isn’t a million miles from the 619 scored by the Core i9- i9-11980HK, and that was in the £4000-plus MSI GE76 Raider I tested earlier this month. Its multicore score of 3402 is more in line with mid-range expectations, and reflects how nimble the G5 feels when navigating Windows and flicking between applications.


Having a fast SSD helps, and the G5’s NVMe drive is no slouch. In the AS SSD benchmark’s tough 4K random tests, it returnd a read speed of 57MB/s and a write speed of 114MB/s, faster than the higher-end Gigabyte Aorus 15G on both counts.


Capacity may be an issue for some, though. The 512GB drive only ends up making 465GB usable, and a chunk of that will always be occupied by the Windows installation. As such, it only takes a handful of games to fill up, never mind any other apps, video files or photos you want to save on there. That being said, if you’re confident enough to undo a set of screws on the laptop’s underside, you can remove the base and add in a couple of fresh drives yourself. There are single spare slots for both an M.2 SSD and a 2.5in drive, so you could have as many as three on the go at a time. This also grants access to the SO-DIMM RAM slots, so you can upgrade on the preinstalled 16GB in the future as well – our guide on how to install RAM will help.


The G5 continues its relative tinker-friendliness with a removable battery, which you can unlock directly on the underside without any screwdriver work. Perhaps the idea was to let you swap in spares, as for all its qualities elsewhere, the G5 does not last long away from the mains. You could wring out two or three hours of typing and browsing, but I only got an hour and five minutes from a full charge when running Shadow of the Tomb Raider.


Remember, though, that the G5 doesn’t actually need to be a go-anywhere laptop. If it can deliver the graphical goods at a lower price than most desktop graphics cards, there’s an argument for it as an everyday PC replacement – and one that, for me at least, became more compelling the longer I spent using it. Headphones are recommended, to block out the fan noise, but even so the G5 is a reassuring reminder that going for the cheapest option doesn’t always mean bargain basement dreck. Sometimes, you can find yourself a surprisingly good gaming machine.