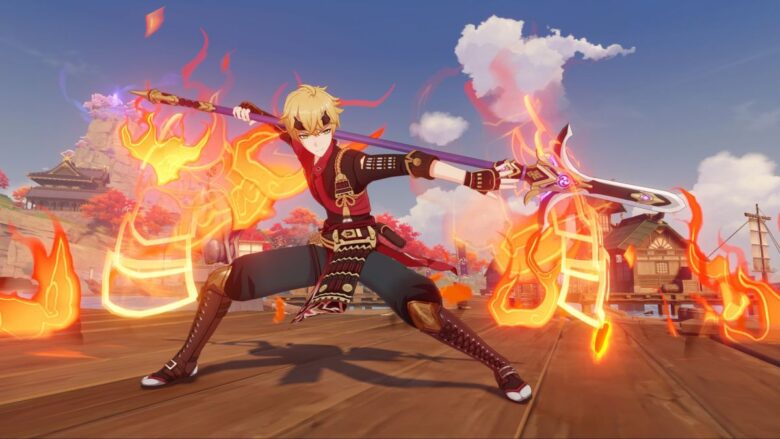 Looking for all the details surrounding Genshin Impact 2.2? A brand new version of the open-world RPG is here, complete with characters, events, and lots more. In the new version, we’re heading to the foggy Inazuman island of Tsurumi to delve into an ancient monster-filled dungeon with Childe, Xinyan, and a floating paper Samurai called Shiki-Taishou.

Though there’s no Halloween event, it does seem like Genshin Impact 2.2 is getting a little spooky this time around, with a mysterious foggy island, a new spectral wolf enemy, and a rerun of everyone’s favorite undertaker, Hu Tao. There’s also plenty of other stuff to do, including fighting ancient robots, arranging flowers, and even some new characters in the form of capable caretaker, Thoma, and crossover character, Aloy.

The Moonchase Festival may finally be over, but you’re still going to need to find those Sango Pearls if you want to level Kokomi. There are also a variety of other Genshin Impact guides for the latest events and characters. That said, let’s dive into version 2.2, shall we?

When is the Genshin Impact 2.2 release date?

We have two new Genshin Impact characters  in 2.2, as well as a couple of reruns:

Thoma
We already met the Kamisato Clan’s housekeeper in Inazuma’s Archon quest, but in Genshin Impact 2.2, the four-star Pyro polearm-wielder will be a playable character. Thoma will be available as part of version 2.2’s second banner Moment of Bloom, alongside the rerun of Hu Tao. If the usual banner schedule applies, this is likely to release around November 3.

Aloy
Though the huntress from Horizon Zero Dawn has already launched on PlayStation, she’s now available for free in Genshin Impact 2.2 on PC. You’ll be able to claim Aloy and her four-star bow, Predator, from your in-game mailbox when the new version releases, provided you’re at least adventure rank 20.

Tartaglia
The eleventh harbinger of the Fatui is back for a re-run. Tartaglia—or Childe—will be available in Genshin Impact 2.2’s release banner, Farewell to Snezhnaya on October 13. We don’t know who the four-stars accompanying him are, but if you want this five-star Hydro character, that’ll be the best time.

Hu Tao
Wangsheng Funeral Parlor’s Pyro polearm-wielding director also returns for a rerun. As mentioned, she’ll appear alongside Thoma in the Moment of Bloom banner, but we don’t know who the other two four-stars on that banner will be yet.

What new regions have we got?

In time for Halloween, we’ve got the spooky, fog-shrouded island of Tsurumi. This is the last island region of Inazuma to be added to the game, and it’ll serve as the location for Genshin Impact 2.2’s main event, Labyrinth Warriors. This will see us descend into a Spiral Abyss-esque dungeon, and involves Xinyan and Tartaglia. We know Tsurumi has a new kind of treasure chest for furnishing blueprints, called the Remarkable Chest, and it’ll be home to the new Rifthound Whelp monsters.

There are a few new weapons coming in Genshin Impact 2.2. Here’s what they are:

The main new event is Labyrinth Warriors, which sees us fight through a five-floor multi-roomed dungeon known as the Mystic Onmyou Chamber, alongside a paper Samurai called Shiki-Taishou. Similar to Spiral Abyss, you’ll need to select two teams—one primary and one support—as well as Shikifuda, which act as the floor-based buffs you’d usually choose in the Abyss.

You’ll defeat random monsters in each room, which earns you currency to improve Shiki Taishou, get better Shikifuda, or claim rewards from the event shop. There will also be a chance to earn four-star Pyro claymore-user, Xinyan, as part of the event, as she’s somehow involved in the story of the labyrinth.

Shadow of the Ancients is about defeating Anomalous Ruin Graders—a regenerating version of the boss enemy. First, you’ll need to locate materials to repair Pursina Spikes using a prospecting device, then you’ll have to charge those spikes with Electro while being attacked, then you’ll have to do that again while fighting the Anomalous Ruin Grader to prevent it from repairing itself. This event looks a lot like a boss fight while spinning plates—a little like dealing with the status effects from the La Signora fight.

Tuned to the World’s Sound follows on from the Windchase Festival’s Lyre-based rhythm game, giving us a Floral Zither, and having us play songs alongside different Genshin Impact characters. Dreams of Bloom is a flower-growing/arrangement event where you plant special seeds in your Serenitea Pot for rewards, including a decorative flower stand, and flowers to give to other players.

Finally, there’ll be another Ley Line Overflow with boosted Blossoms of Wealth and Wisdom for extra Mora and Experience, and two new hangout events: one each for Thoma and Sayu.

Will there be any new monsters to fight?

While we’re not getting any new bosses in Genshin Impact 2.2, we are getting a new monster type. The Rifthound Whelp and its variants look like spectral wolves, or re-animated wolf puppets. Either way, they’ll certainly complement Tsurumi island’s spooky vibes. The Rifthounds turn invisible during battle to stalk you—like the Fatui Agent—and they’ll deal continuous damage to all of your party members if they land a hit, whether you’re shielded or not.

The Serenitea Pot is getting fancy floating rocks

Alongside the flower arranging stand from the Dreams of Bloom event, there’s a lot of new stuff coming to the Serenitea Pot. First, there’s a new realm style modelled after Inazuma called ‘Silken Courtyard’ along with various Inazuma furnishings. You’ll now be able to claim furnishing blueprints from Remarkable Chests in the world, too. But the highlight is the new floating rock platforms that you’ll be able to place furnishings on, creating your very own Liyue-style adeptus abode.

Also, Genshin Impact is getting DualSense controller support on PC