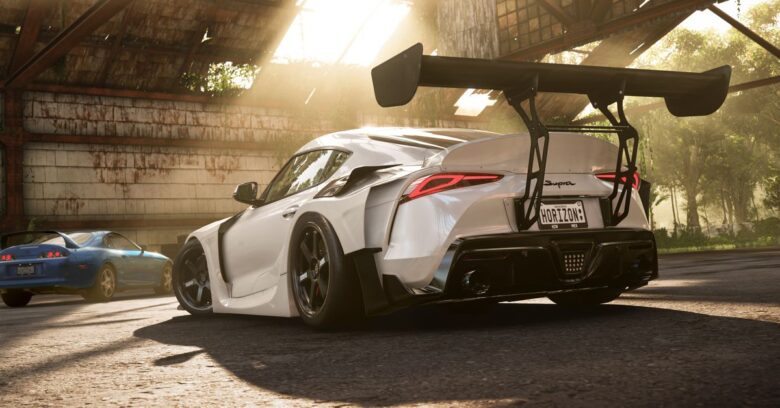 In five editions spread out over a decade, Forza Horizon’s most distinguishing quality is not high-fidelity visuals, a deep fleet of stylish cars, or immersive handling and acceleration. It’s the uncanny sense of place I get from the setting. It’s a fictional representation of a real place, and in some cases, I’ve never set foot in the country inspiring it. But no other racer has ever made me feel like my mind’s-eye recollection of a highway sunset, a woodsy switchback, or a tree farm’s precisely planted rows riffling by like a thousand dictionary pages was anything other than a lived memory.

Mexico, the setting for Forza Horizon 5, is both a quasi-return to the series’ origins, and the best execution of a racing open world to date. Forza Horizon was set in Colorado, and much of that state was created from what was once Mexico, after all. The arid canyons, above-the-treeline mountain roads, and rolling farmlands all feel like a reunion with what Playground Games did so brilliantly — and did with an Xbox 360 — nine years ago. Forza Horizon 5 is both the best game in the series, and a reminder of how good everything preceding it was. The key is knowing how to navigate the game’s expansive offerings, without drowning or getting distracted by the heft of them.

Forza Horizon 5 immediately stuns with its jungles, swamps, and beaches. All of this terrain meaningfully differentiates the action, sometimes within a racing series run with the same vehicle three times. Road racing could mean a lot of technical cornering requiring something practical, like a rally car; or it could be out on the highway, where the pure speed of a Koenigsegg, Pagani, or Bugatti hypercar can be brought to bear.

But whichever way I chose to drive, the handling in Forza Horizon 5 supported me. The range of control and freedom to delegate it, from just a modest set of options and adjustments, is better here than in any other arcade or action-style racing game. In terms of pick-up-and-play usability, it’s better than any motorsports simulation I play, too. (And the visual information, at 60 frames per second, is smooth and responsive enough to provide a sense of momentum without motion.) This was clear from the preview, where I found that racing got better if I turned off the traction and stability assistance.

A lighter approach is key when driving in Forza Horizon 5. Only when I used “arcade” steering did I feel like I was fighting against a vehicle constantly trying to re-center itself, as is typical in Need for Speed and similar series. Standard and sim steering, even with stability assist engaged, still had enough play for me to initiate and continue drifts.

Driving any event cleanly and finishing it successfully, even if it’s a bone-rattling, top-speed plunge through La Gran Caldera’s rubble-strewn alluvial fan, is easy enough. (There’s always the rewind feature, but only perfectionists should need it.) Winning against Forza Horizon 5’s hard-spiking AI, though, is where the real work lies. And unfortunately, critical pieces I sought were often drowned out in a user interface, and experience, that can fairly be described as information overload.

Just start with the game’s map, which after barely an hour of play already looks like the bulletin board for an overworked police detective — so many leads, where do I begin? How about Las Alfueras, a point-to-point street-racing event. That’s fine, but “street race” might be deceptive for how much of the course is on a two-lane rural highway. The event’s recommended vehicle type and performance classification would give me a clue about what to prepare for, but I’d only learn those details once I drove to the event and entered it. Knowing such things would save me a little time in selecting the right car and making sure it was tuned and upgraded before entering the race. Attacking a map this large, it’s disappointing how much information is thrown at me, and how little of it helps me make a decision.

Nothing limits the vehicle I can enter in any race, but the better the car, the keener the AI competition is going to be against it. Then, if I don’t know the last setup or set of tires that I put on this ride, it’s another trip through the menus to find out. Serious racers may not mind this kind of work, but it necessarily conflicts with the pick-up-and-play spirit that permeates Forza Horizon 5’s core gameplay loop.

Even then, the only way to really plan for a race, especially against stouter AIs, is to run it a few times, understand the terrain and the width of the course, and determine whether it prioritizes acceleration and cornering, or pure speed to defend against the pack on a long straightaway.

I don’t mind shakedown runs, but I’m also hugely invested in racing games, and ready to sink hours into the task of achieving a flawless run. You should see how much I obsess over practice, qualifying, and setup in other motorsports games. The fact that I casually blundered into races with heavy strategy demands seems inconsistent with Forza Horizon 5’s overall relaxed tone, and especially with a map dotted with an endless number of things to sample and enjoy rapid fire.

And the map is dense with detail, which is exciting, but can annihilate my ability to focus. This is a bit like arguing about the presentation of a buffet full of yummy food. While there’s a ton of value on Forza Horizon 5’s map, I feel constantly pinged with mentions and suggestions, from all directions, like two teenagers are blowing up my DMs. There’s the “New!” flag on an event, in a series different from the one I’m looking for. En route to the next leg of a story-based expedition, a voice on the in-game radio interrupts with a “skill song,” where my open-world hooning is now worth double the XP. Press X to go to the map now!

Finally, woe betide me, should I cross territory of an active Horizon Arcade event, I’ll be automatically entered, with its goals and route overriding whatever I was doing. If there’s a way to opt out of Arcade events until I actually want to participate, I can’t really find it. The minigames aren’t bad, but I really would like to approach Forza Horizon 5’s offerings more purposefully. Unfortunately, the game rarely lets me do that.

In this way, the game’s Stories and Expeditions — the biggest narrative experiences, calling on Mexico’s unique setting and themes — can get lost in the shuffle. These tours give players new hideouts and hubs, or offer vehicles, customization bling, and other cool stuff to unlock. But it took real willpower for me to go through all five stages, in a row, of one early Expedition. It was a maze of distractions: A couple of level-ups led to a couple of wheelspins, which rewarded me with a great car (the 2019 Aston Martin DBS Superleggera), which, I mean, isn’t going to paint or tune itself. I can appreciate that Playground Games leaves me plenty of space to take things on my schedule. But erring on the side of unstructured play and then littering it with interruptions can make the whole game feel scatterbrained and disconnected.

Forza Horizon 5’s two largest suites for user-generated content — the paint job and livery editor, and the new Events Lab — likewise don’t supply much orientation. For vehicle cosmetics, this isn’t that much of an issue, especially if you have experience with previous Forzas’ customization tools. I still had to feel my way through a few menus to accomplish the effect I was looking for or understand what all of my options meant in, say, painting the rims on my Maserati GTS.

The Events Lab has no tutorial, although it is simple enough to create and share something in it. That said, the only surface-level options I could see were placing checkpoints, and I had no guidance on where checkpoints should go (before a turn? after?) or any visibility into how wide or narrow I’d made them (though that may have been a glitch). The Events Lab really puts the “yourself” in do-it-yourself, and the polish, coherence, and challenge of a standard Forza Horizon 5 race is hard to pull off with so little instruction.

It would figure that a lot of Heisenberg’s uncertainty principle is at work in my review: the need to sample as much of this game as I can while writing on a deadline. Left to my own devices, I probably will be more deliberate about racing in main branches of the events tree and avoiding sideline distractions or unstructured fidgeting in the customization suites. The game does have characters, does tell stories, does present everything as part of an overall career — but its goals don’t have any real imperative to them. So there shouldn’t be any fear of missing out in Forza Horizon 5, especially since it’s on Xbox Game Pass day one.

Even now, though, I can feel myself tightening up in my shoulders and chest thinking about everything in Forza Horizon 5, and the difference between everything I have — with a V sound — and everything I have — F sound — to do. It’s the difference between opportunities and obligations. The only area in which Forza Horizon 5 stumbles is when it gives me so much of the former that they become the latter.

Forza Horizon 5 is scheduled to be released Nov. 9 on Windows PC, Xbox One, and Xbox Series X, with early access available starting Nov. 5. The game was reviewed using a pre-release download code provided by Microsoft. Vox Media has affiliate partnerships. These do not influence editorial content, though Vox Media may earn commissions for products purchased via affiliate links. You can find additional information about Polygon’s ethics policy here.