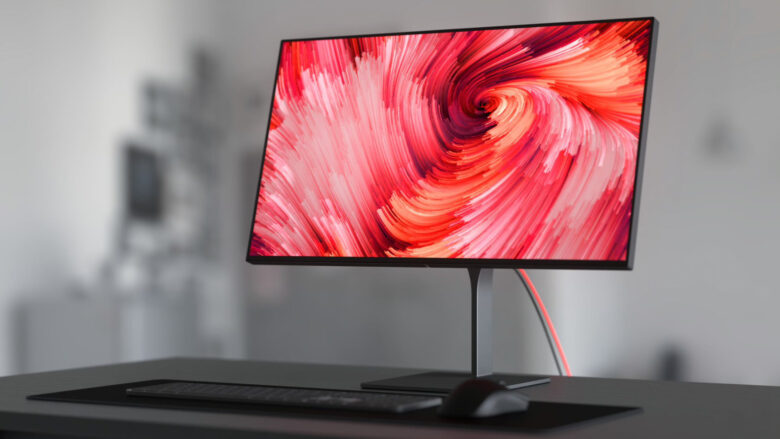 It’s no use packing your rig with the best gaming CPU and graphics card if you don’t own a screen that can keep up with the amount of frames they push, but high refresh rates usually come with a resolution tax. After a lengthy head-to-head with Asus to be the first to bring HDMI 2.1 ports to market, Eve now has one of the fastest UHD panels out there with its crowdfunded Eve Spectrum 4K gaming monitor.

Yes, you read that right; Eve’s latest venture tapped into the PC community hivemind to design the ideal display. In fact, there are three of them, as there’s a 1440p version at 144Hz, another at 240Hz, and the 4K version I’m testing here. It’s easy to be wary of Kickstarters – and even Eve itself after an infamous crowdfunding campaign resulted in some backers of the Eve V 2-in-1 tablet not receiving their device – but the Eve Spectrum is a very real product that’s already complete and on its way to your favourite third-party retailers.

While it isn’t the first 3840 x 2160 resolution display that can hit the coveted 144Hz refresh rate, the Eve Spectrum ticks almost all the boxes a gamer could want from a 27-inch gaming monitor. It packs a beautiful LG nano-IPS LCD panel that’s bursting with colour, adjustable latency, adaptive sync, and more ports than you can shake a stick at. The only thing that lets it down is its struggle with HDR, which we’ll touch on later.

First, we can’t talk about design without first addressing that the stand comes separately with its own $99 price tag on top of the $799 monitor. This is at the request of Eve’s community, as many already own a desk clamp or wall mount. Personally, I’m a fan of this, as it’s more environmentally friendly and economical without having a lump of unused plastic cluttering your room, it gives you the opportunity to invest in cheaper 100mm x 100mm VESA alternatives, and the monitor would’ve been a combined $898 had they come as a package deal without giving you the choice. That said, I can faithfully say that Eve’s stand is worth every penny.

The stand feels well crafted and has the smallest footprint I’ve seen yet, taking up a tiny amount of space on your gaming desk. It’s a refreshing change from the garish two-pronged feet that protrude into your gaming keyboard and mouse pad – I’m looking at you, Samsung Odyssey G7. It also affords a lot of elbow room with its rotation, vertical tilt, and height, but doesn’t let you swivel the screen horizontally – which isn’t necessarily a problem considering how condensed the stand is. 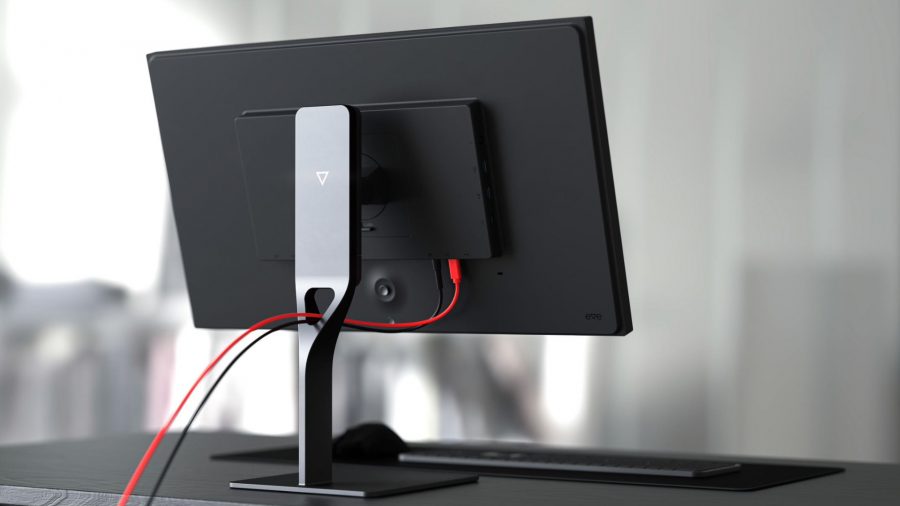 This minimalistic ethos carries over to the single power LED at the bottom, as well as its thin bezels, as the Spectrum is all about putting the screen front and centre. This means there’s no room for internal speakers here, but they’d never live up to the best computer speakers anyway. All in all, it doesn’t look like a gaming monitor, and it’s actually better off for it.

There’s a four-way joystick you can use to navigate menus located on the back. It pulls up a pretty basic on-screen display (OSD) that’s text-rich, but most of the features you could want are there, minus picture-in-picture. Unlike other displays that take the dial approach, it also has a dedicated power switch below, so it doesn’t take more than one click to clock off for the night. It’s a small, but thoughtful inclusion that stops you having to frustratingly menu hop right before bed.

Moving onto the ports, it has a DisplayPort 1.4 and two HDMI 2.1 ports – the latter of which operate at 48Gbps, making the Spectrum an ideal choice if you want to crank your Xbox Series X or PS5 consoles up to their full 4K, 120Hz potential. There’s also a USB Type-C port that’s perfect for connecting your gaming laptop. This supports a DisplayPort Alt mode that can carry 4K visuals at 60Hz refresh rate, and it delivers 100W of power to charge your device – but do note that your notebook will drink more juice than it receives when playing a game. 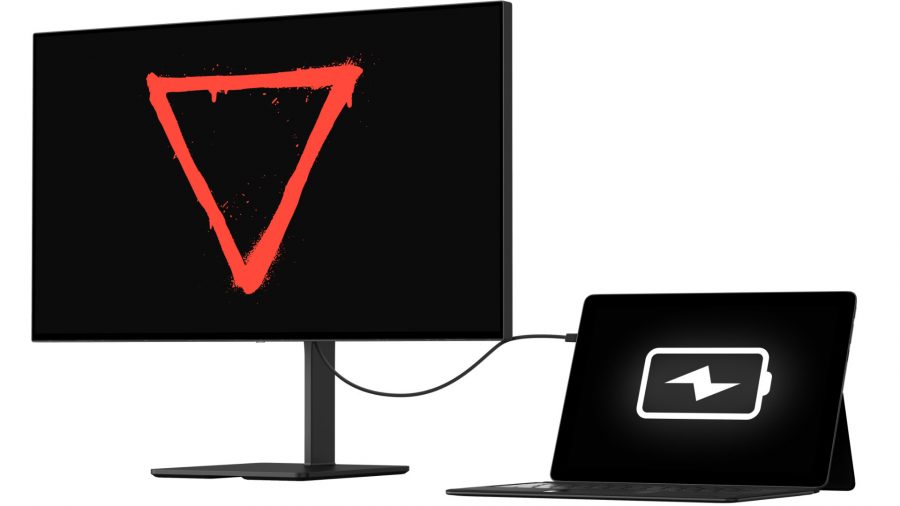 And lastly, there’s a USB Type-B input that you can use to connect the built-in hub to your gaming PC. This lets you manage cables by running your peripherals through the monitor’s three USB 3.1 Gen 2 ports (two Type-A and one Type-C) located on the left-hand side.

Visually, the Eve Spectrum is a pleasure to look at. As a 27-inch screen at 4K resolution, it has a noticeably high pixel density but it relishes all the benefits of an IPS panel, including excellent viewing angles, wonderful white saturation, and vibrant colours right out of the box – it certainly lives up to its 100% SRGB and 98% DCI-P3 rating.

Sadly, this also means it comes with the pitfalls of an IPS panel, too, as you’ll have to simply settle for mildly good contrast. It boasts deeper blacks than most IPS models specifically, but it’s still no VA panel in that department. It also comes with a default 5ms response time, but the Eve Spectrum has a trick up its sleeve with ‘overdrive’ settings. Your mileage may vary if you crank this too high, as it can introduce some blurring and ghosting. We didn’t want to make that sacrifice and found the mid 20s to be a sweet spot out of 63 custom settings. 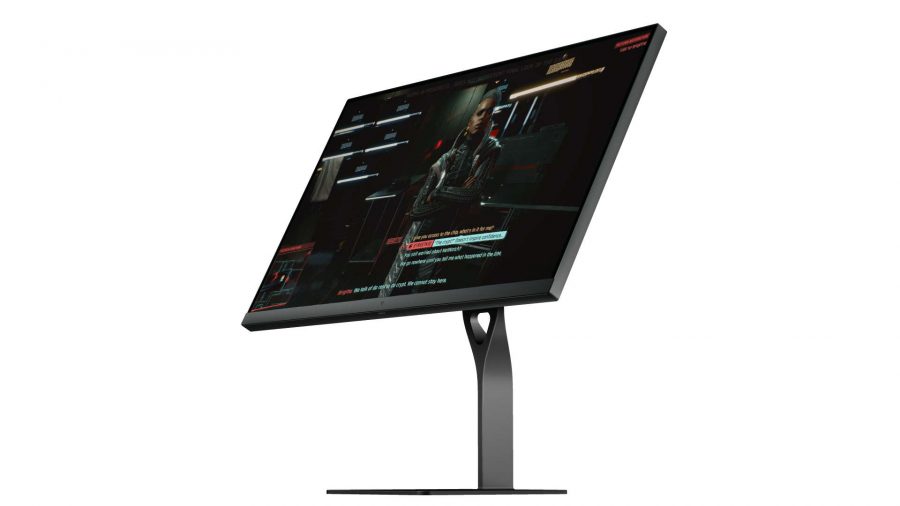 The only disappointing element on the Eve Spectrum is its implementation of HDR, which was the real horror when testing it with Resident Evil Village. It has HDR10 and is VESA DisplayHDR600 certified with a peak luminance level of 750cd/m2, but it uses edge-lit local dimming across 16 zones. This results in some sections of the screen that are noticeably brighter than others, giving an uneven look that’s particularly prominent in darker parts of the game. Brighter HUD elements also bleed into the surrounding darker areas, making it look a smudgy mess. It might be best sticking with SDR, which is where the Eve Spectrum thrives.

Personally speaking, 4K resolution at 144Hz is the sweet spot for most gamers, so long as you have the hardware to push it. It isn’t quite as swift as the QHD 240Hz or HD 360Hz monitors out there that would better suit competitive FPS games, but it doesn’t need to be. The Eve Spectrum boasts crisp and immersive detail that make the Crysis Remastered Trilogy and New World look gorgeous, while still showing me enough frames to make better use of Nvidia Reflex and kick some butt in Rainbow Six Siege. It’s also screen tear and stutter-free with AMD FreeSync and official Nvidia G-Sync certification, meaning you don’t need to rely on VSync. 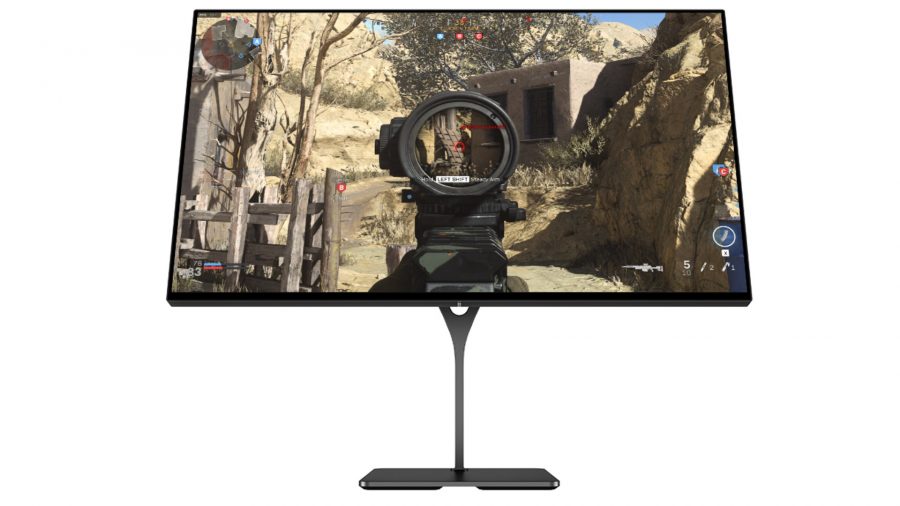 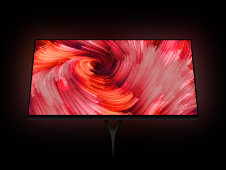 Currently, the Eve Spectrum 4K 144Hz is one of the best gaming monitors you can buy at $799 / €799, and even if you fork out the full $898 / €898 to include the stand. There’s nothing quite like it on the market. The Asus ROG Strix XG43UQ has many of the same features but its mammoth 43-inch size and $1,399 MSRP will be too much for some to swallow. The LG Ultragear 27GP950-B shares the same panel as the Spectrum for a similar price, but Eve’s custom colour calibration is nothing to scoff at, being up there with some professional alternatives.

Poor HDR causes the Eve Spectrum 4K 144Hz to fall short of perfection, but everything else is done so well you’ll hardly even notice

HDR isn’t worth entertaining in its current state, but it’s not enough of a loss to put a damper on things. The Eve Spectrum might have earned PCGN’s perfect score if the feature was up to scratch, but it’s not the headline here, and the display does everything else so well at this price point that it’s easy to look past. There are hopes Eve will put HDR woes to rest in one of its many firmware updates, which continue to enhance support and features every other month, but managing director Tuukka Korhonen tells us that solutions aren’t simple as the company searches for one.

As for past controversies, it might bring you comfort to know that today’s Eve isn’t the same one that left some people in the lurch, but Korhonen tells us it is “working to have those people compensated once the company has the means to do so.” This will take some time and hints that reimbursement might be dependent on the success of the Spectrum. For now, however, we’re told Eve’s “top priority is providing a good experience to customers ordering and receiving Spectrums at the times of supply shortages and port disruptions.”