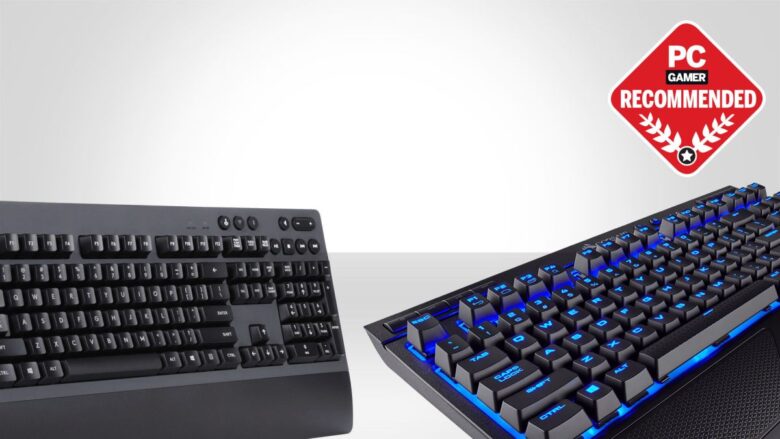 Wireless keyboards have improved so drastically over the years, you can hardly tell the difference between a wired gaming keyboard and a wireless keyboard these days. Gone are the days of poor battery life and pining for uninterrupted connections.

Deciding on a switch type, size, and any extra features you might want are all just as important when choosing a wireless keyboard as they are a wired one. Connectivity type is important, whether that’s Bluetooth, USB dongle, or both. USB dongles are easier to set up, but they take up a USB port, while Bluetooth works really well so long as your PC has Bluetooth capabilities.

We’ve tested a bunch of wireless gaming keyboards, checking their speed, reliability, connectivity, build quality, and much more to give you an list of the best ones out there.

Wireless keyboards have often translated to the antithesis of what a gaming keyboard should be. Still, the most recent wireless technology from Logitech, built into the G915, aims to break that notion. The low-profile design features all the trappings of the best mechanical gaming keyboards available: a selection of mechanical switches, dedicated macro keys, media controls, and full per-key RGB lighting.

The G915 is slim but remarkably dense, weighing a bit more than you’d think from the looks. The aluminum-on-plastic frame is incredibly sturdy and looks like a piece of modern art (in a good way). However, the real test is in battery life; thankfully, the G915 passes with flying colors, boasting a 30+ hour lifespan with full RGB brightness on a single charge. Turning off the RGB lighting extends that life dramatically, allowing it to function for up to 100 hours without recharging, but who’s going to do that, eh?

The sole drawback to the G915 is its astronomical price tag. At an MSRP of $250, it’s drastically more expensive than our favorite wired mechanical keyboard, the Corsair K95 Platinum. The G915 does, however, have an identical wired cousin, the G815, which is ‘only’ $150.

The Logitech G915 feels like a logical evolution of what a wireless mechanical keyboard should be—featuring excellent connectivity, impressive battery life, and an uncompromising array of features… to those who can afford it.

The technology behind wireless peripherals has come a long way, and Logitech’s Lightspeed wireless connectivity is a prime example. The G613 never once dropped a connection despite the plethora of wireless devices on our desks. It matches wired peripherals in terms of stability and responsiveness. It’s efficient, too; a pair of AA batteries can push up to 18 months of continuous use.

Though it’s designed for practicality first, it’s anything but bland. A second glance reveals a row of dedicated macros, media controls, and a volume rocker. The grippy wrist rest is spacious, too, although it’s worth noting that it isn’t removable. Understandably, backlights were cut to conserve battery.

This proprietary Romer-G switch features a travel distance of just 3mm and a subtle tactile bump. Its mild, quiet nature makes it suitable for both gaming and typing.

–No macro keys–Nowhere to store the USB dongle

Completing a clean sweep for Logitech in the top three wireless gaming keyboards is the recently released G915 TKL. It sports the same excellent Lightspeed wireless connection and high-quality build and design as its larger sibling. That means you get separate media controls and an aluminum-on-plastic chassis which makes it seriously robust.

You also get the fancy new Logitech switches, more closely aping the Cherry MX design than the original Romer-G switches. The low-profile Logitech GL, a variant of the Kailh Choc switch, is one of the best short-stack mech switches and is as responsive as it is diddy.

But you have to make some sacrifices for the tenkeyless design’s compact nature, which means no macro keys. Well, no physical ones anyway. The macros are now a secondary function of the F keys, and you can jump into the Logitech G software to prioritize them.

This all means the G915 TKL is practically as good as the full-size board, packing almost all the functionality… and a similarly sky-high price too. Damn.

The reason for my hesitance on the last point is that the battery life of the K63 Wireless is already pretty abysmal without it. Its integrated rechargeable battery lasts a measly 15 hours with the lights set to medium and 25 hours at the lowest brightness. Corsair quotes the battery life to be 75 hours with the backlights off, at which point the inclusion of the backlight seems like a redundant decision. Corsair recommends plugging it in for uninterrupted gameplay, but doesn’t that defeat the purpose of a wireless keyboard?

Battery issue aside, the K63 Wireless is a solid board. The keys are responsive, and all its handy features make getting through your day a little easier. As it stands, there’s no better option if you need a compact, wireless mechanical keyboard.  You can also seat the K63 wireless in the Corsair Lapboard for gaming in the living room. Neat.

If you want to solve several cord-related issues with a single blow, the Razer Turret has you covered. It’s an excellent, sturdy mechanical keyboard (modeled after Razer’s BlackWidow and packing clicky, tactile Green switches) with a built-in, retractable mouse pad paired with a top-shelf wireless mouse. The turret works seamlessly with both PCs and Microsoft’s latest family of consoles, the Xbox One.

Retailing at $250, the Turret is right around the price you’d pay for a decent wireless gaming mouse and keyboard independently, and you’re getting quality products for your money. The Mamba-equivalent of the Turret performs and its separate counterpart, with a 16,000 DPI sensor and a robust IPS rating. The keyboard is indistinguishable in terms of performance from Razer’s BlackWidow. It’s a great way to clip two cords at once and built tough to endure your most violent tantrums.

How do you test a wireless keyboard?

The determining factor of wireless keyboards starts at the stability of the connection. Regardless of the wireless tech used, the board must sustain a stable, responsive connection at all times. That’s the paramount characteristic we pay attention to throughout testing.

We apply the same testing suite used for our best gaming keyboards to gauge the board’s performance. Each board is run through several Starcraft matches, Call of Duty: Warzone, and a few combat sequences in the Witcher 3. We take keen notes on the performance of its switches. Are they responsive? Were there any essential skips or ghosting?

Due to the inherent limitations of wireless connectivity, some features aren’t possible for wireless keyboards. USB pass-throughs are out of the question. On the other hand, Audio passthrough is doable, but they’re often omitted due to the subpar sound reproduction since audio signals are much more susceptible to noise. Backlights are a double-edged sword: they enhance the aesthetics but are also taxing on the battery.

This brings us to the battery life. If the keyboard continually needs to be charged or eats a deck of AA batteries a week, its wireless nature becomes a liability rather than a selling point. The type of battery also matters: integrated batteries saves you money but can wear out over time. Removable batteries can be swapped out and instantly charged, but they tack onto the cost of the keyboard.