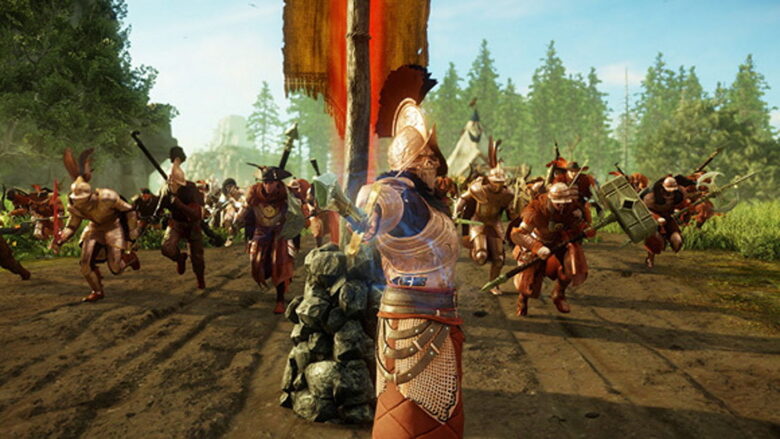 If you want the best New World weapons, you’re in luck because Amazon’s MMO offers a surprising degree of flexibility in weapon choices and how you wield them.


That flexibility means you can make almost any weapon work regardless of your style, though some weapons are easier to recommend than others.


New World does things a bit differently from other MMOs. You still technically have tank, healer, and DPS roles, but equipment is mostly geared towards DPS and healer. That said, you can even build your healer into a defense unit or outfit them with DPS-oriented weapons.


New World also lets you equip two weapons on each character, which is something we recommend for tanks and healers in particular. It’s a party-based MMO, but there’s always a time when your healer will explore solo, and tanks need a reliable way to deal damage as well.


You can make any weapon or weapon combination work depending on your chosen skills and augmentations, but these are the top picks to get started with in New World.


The Life Staff won’t deal much damage, but as the name suggests, it will keep you alive. The Life Staff is New World’s sole healing weapon, and its Healing and Protector skill trees give it a surprising level of versatility.


In addition to bolstering your life-restoring powers, the Healing skill tree grants abilities such as Splash of Light and Mending Touch that remove debuffs.


Protector is a more active branch that combines healing with passive and active buffs. The healing potency is a bit less, but you get AoE effects for skills as a trade-off.


Whatever your choice, we recommend pairing Life Staff with at least one other strong weapon regardless of your ideal class.


The Hatchet is an ideal DPS weapon that rewards aggressive play and constant attacks. Its heavy and charged attacks deal significant blows, but even stringing a chain of normal attacks sees your damage percentage increase.


The Hatchet’s skill trees are Berserk and Throwing. Berserk mostly gives you new attacks and enhanced damage, but it has two standout skills: Defy Death and Berserk. Defy Death lets you survive a fatal blow with 50 HP once every 75 seconds, while Berserk boosts your damage by 20% for 15 seconds.


The Fire Staff is one of New World’s most powerful weapons, but not at first. You’ll want to pair the Fire Staff with another weapon until you start investing heavily into its skills, since it relies on mana for its attacks. That means you’re defenseless when it runs out, but once you expand your mana pool, the Fire Staff is a potent weapon.


The Fire Staff’s skill trees are subtly different from each other. Both revolve around extending the effects of your fire spells, but Fire Mage is almost completely DPS focused, while Pyromancer offers some status and support options for the well-rounded mage.


The Great Axe hits hard and has a wide area of effect, so it sits comfortably in the overlap between DPS and tank. It’s a two-handed weapon that almost always hits more than one foe at a time, and its two skill trees make it possible to build for either role.


The Reaper tree is the DPS choice. Its skills and passives increase damage, penetration, and move speed, making it easier to reach foes and dispatch them quickly. There’s even a couple of self-healing skills to take the strain off your healer.


Mauler also enhances the Great Axe’s attack potential, but throws in some damage reduction and party buffs as well. It’s ideal for tanks, but also functions as an all-around efficient skill tree for any role.


A-tier weapons rank slightly lower, but not by much. Skill variety is ususally the most significant difference, but all of these are still worthy choices.


The Ice Gauntlet is a powerful DPS weapon that’s both versatile and slightly more limited than its counterparts. It’s a popular complement for the Fire Staff thanks in part to a few skills that help restore mana.

Ice Tempest is the most interesting of the Gauntlet’s skill trees, with skills such as Ice Spike that deal continuous damage and Ice Storm that slows enemies down. This is the branch to pick if you prefer a less “in your face” fighting style.


Builder focuses on ranged attacks and some buffs. Entombed is an excellent choice for tanks or DPS classes that temporarily protects from all damage and can be enhanced to offer a lasting defense buff once the skill ends. This tree’s offense potential centers around the ranged Ice Pylon attack, making it slightly less useful for dealing continuous damage.


Sword and Shield is the classic jack-of-all-trades weapon with something for every build, but nothing that stands out as spectacular. There’s also less flexibility in your skill trees. Prioritizing one build means giving up potential for another, and while that might sound uninteresting, it makes Sword and Shield is a perfect beginner choice.


Swordmaster is purely a DPS branch, and while it augments Sword and Shield’s offensive capabilities, it’s also pretty standard. You get some high damage skills, such as Reverse Stab, and a slight buff to party attack, along with a leaping attack that’s handy for covering long distances.


The spear is another solid, if slightly less inspiring, weapon choice. Its skill trees add several effects to your attacks, including knockdown and slow, with passives that help take advantage of the afflictions you apply.


Zoner has something for any style. Javelin is a ranged attack, while Sweep knocks enemies down, and Cyclone inflicts slow for a short period. Impaler is more DPS focused, with attacks that add bleed and stun effects while dealing heavier damage than Zoner’s skills.


These are still handy weapons, but have less skill variety or come with serious drawbacks.


The War Hammer is slow and bulky, which makes it tough for PvP, but excellent for tanks. Whatever your choice, you’ll want to pair it with a more versatile weapon to avoid getting overwhelmed and outmatched.


The War Hammer has two distinct trees. Juggernaut has tank potential, but mostly focuses on dealing high damage in a wide area. The drawback is, as with regular War Hammer attacks, you move pretty slowly in the process. Crowd Crusher is the Hammer’s best skill tree, with significant potential for strong attacks and moves that also buff your character. It’s a must for tanks.


If you have good aim, the musket will likely sit higher on the tier list. Headshots are as lethal as you’d expect, but once you start investing in its skill trees, even body shots deal heavy damage. The Trapper tree also offers a more unique approach to combat than other weapons.


Sharpshooter is good if you want the more traditional DPS-oriented approach, since its skills bolster your firepower and reward good aim. Trapper lets you build an unpredictable musketeer, one that combines strong shots with deadly bombs and traps dealing continued damage on top of fatal effects.


These remaining weapons don’t offer much in variety or usefulness, and we only recommend them as secondary weapons.


The rapier is a limited sword that works best paired with a more flexible weapon, though it’s certainly not our top pick even for that.


Despite the name, the Blood tree only has one skill that inflicts bleed, and the attack power for that plus its other skills is less than 100%. Grace includes some fancy-looking skills, such as Fleche and Riposte, but beyond looking nifty, they do very little of value.


The bow is a bargain musket that’s significantly less fun to use. It works well enough, but most of its skills are essentially variations of the same theme. Bow users should pair it with a more dynamic weapon, ideally one with crowd control skills.


Skirmisher is a bit lackluster, though the poison arrow effect is helpful in most situations with fewer enemies. Hunter has better damage potential, especially with penetrating arrow, but it’s still limited compared to every other weapon in New World.


You can make most weapons work in New World, but if you’re digging into faction wars, you’ll want to prioritize the best weapons and most useful skills. If you’re still getting used to how things work in Amazon’s MMOs, check out our overviews for where to find rare items such as Fae Iron, Saltpeter, and Petal Cap. Some of the bosses you’ll face for quests aren’t the easiest to track down either, including Boatswain Ambrose.