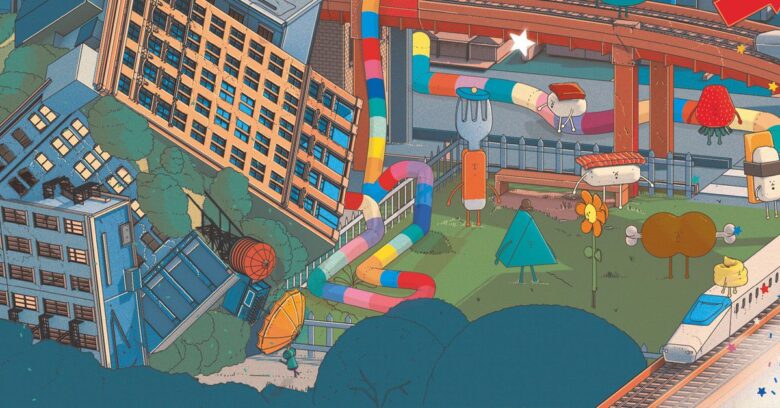 We loved the art, so we asked Whistler to provide the full image and dig through it to point out some of the best Easter eggs, which you can find below. A Profound Waste of Time is currently running a Kickstarter campaign to fund reprints of its first two issues.]

The cover of APWOT’s second issue was the result of many months of work and preparation, and required a huge amount of back and forth to get right. It’s filled to the brim with references to the work and worlds of Keita Takahashi, but rather than spell out every single one (I’ll let you discover them all for yourself), I’d like to let you look behind the curtain on a few key areas that we gave particular attention to.

Contents of this Article show
1 The Prince – The Pea-sized Princeling
2 Noby Noby Boy – The Longest Boy
3 Architecture from all over
4 Royal presents – cosmic gifts
5 Other friends!
5.1 Related Posts:

The Prince – The Pea-sized Princeling

Can you see him? We play with scale a lot in this image, but it was important to everyone involved that the Prince remained small, especially relative to other characters. It’s actually quite easy to miss him entirely now. Having him be tiny not only felt true to the source material, but meant we could have more space for scenery and other characters on the main face of the cover. There’s a lot going on already in the image, so it was really useful to be able to integrate him in this unobstructive way.

In terms of finalizing the size, we just wanted to make sure that he was proportionally correct next to the King of All Cosmos. He needed to be small enough to be able to stand comfortably on his father’s palm, as he does in the original Katamari Damacy when a level is completed. The Prince has such an iconic design it was almost a shame to make him so hard to see, but we made sure to get his cute face close up on the illustrations inside the magazine.

We really wanted to make sure that the ‘big three’ games that Keita is known for — Katamari, Wattam, and Noby Noby Boy — all had representation in some way on the main ‘face’ of the image (what magazine readers would see before opening the issue). When it came to Boy, from the wonderful 2009 PlayStation 3 game Noby Noby Boy, it felt like a good chance to do something creative.

With the cover having gatefolds and panoramic art, it meant that we really wanted to do something interesting with those elements. Boy actually stretches the whole width of the cover from one gatefold to another, with his head being a whopping 600 mm away from his lower half. It’s very satisfying to follow his body all throughout the image, and I’m glad we had enough canvas space to show him off properly! With this approach he’s technically on the front of the publication, but only a part of him. Hopefully when people see his rainbow body stretching across, they’re encouraged to actually unfold the magazine and reveal him in full.

He’s a fantastic character to work with that we were able to have a lot of fun wrapping him around corners and text in the inside pages. We were even able to have him eat some of the interview text with Keita, as he could interact with letters in a similar way in the original release.

If you follow Boy’s body on the cover along to the very end, you can of course also find the Boy House next to his lower half, another reference to the original game. Most of the buildings in the image are very realistic relative to the characters, so it was nice to have a little touch of surreal, playful architecture in there as well.

Architecture from all over

Speaking of architecture, it’s a big theme of this cover. Doug John Miller, the artist responsible for this behemoth, teaches at UCL’s Bartlett School of Architecture. His practice means that he’s adept in 3D modeling, and in fact rendered the whole cover in 3D software traditionally used in the profession (Rhino 3D) before drawing his line art by hand on top of it. Here you can see an early version of the cover image back when we were still figuring things out in August 2019. If you look closely, you can see the King of All Cosmos was initially going to be much bigger than he is now.

We were thinking about a world where Keita was in charge, and what a city designed by him could look like. We were also brainstorming along the theme of utopias and solarpunk visions for the future. As a result we decided that the cityscape should not only be optimistic and lush, but also be a mashup of architecture and visual influences of Keita’s home of Japan and where he currently resides in San Francisco. Wattam is a game very much about bringing the world together, so it felt fitting to reflect Keita’s outlook in this way.

Keita himself was adamant that there needed to be lots of vegetation in the city. One of the first bits of feedback he wrote early on with these renders was simply: “Oh looks cool. A Keita city needs more trees though haha.”

Having so many densely placed buildings meant that it was easy to hide lots of fun little touches amongst them. Throughout the cover there are four hidden royal presents, in reference to how you would unlock various cosmetics in the original Katamari. It can be surprisingly tricky to find them all.

Of course, it’s not just presents that are hidden in this art, as there are also references to Keita’s work beyond Katamari, Noby Noby Boy, and the over 50 Wattam characters dotted around!

Crankin is a character from a game that hasn’t quite been released yet (for the upcoming Playdate console), Crankin’s Time Travel Adventure. We thought it would be fun to emulate Playdate’s screen by having him be lower fidelity in some way. Doug decided to render him entirely on a 2D plane, which came out really nicely.

If you look closely, you might also find a little cube with a face. This character is a reference to Woorld, an AR game Keita made with Funomena for tango technology. You would actually scan your surrounding environment to turn it into an interactive AR playground using this friendly cube character.

I know I said we’d be looking beyond the ‘main’ console games, but I do also want to give a special shout out to the family from the original Katamari Damacy, who scaled this massive skyscraper to enjoy the view only to get blinded.

I’ve only really scratched the surface here in terms of the work done for this cover. I could go on for ages but I think there’s been more than enough waffling from me for one article.

This was a ginormous undertaking, so I want to take this opportunity to say thank you again to Bandai Namco, Keita Takahashi, Funomena, Doug John Miller, and everyone else who made it possible. I don’t know if we’ll ever get to work on something as ambitious and full of detail as this image again, but I’m very proud of the final outcome and grateful for the opportunity.