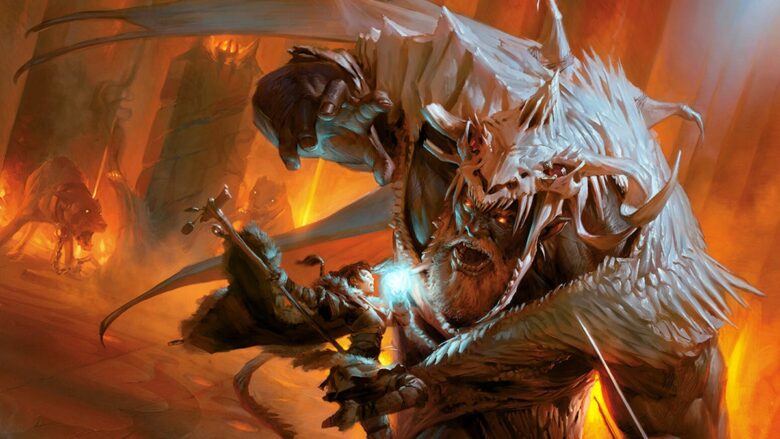 Dungeons & Dragons 5th Edition is known for being two things above all else, depending on who you talk to: really approachable and easy to play, or a total mess that dilutes a lot of the distinctive factors of previous editions of D&D. Both things are true. It is also true that other games exist, and execute on most of 5e’s goals better than it does.

This is not a post about how you are a bad person for liking 5th Edition Dungeons & Dragons. If you love 5e, that’s great! This piece will help you find more games that you will also really like. I am not mad at you, and I do not think you are dumb. I promise. I legitimately love TTRPGs, which is why I’m opening the floodgates to being brutalized for my (correct) takes. And let me just get one thing out of the way. I do not hate crunch. In fact, I really like crunch. I’m this website’s roguelike weirdo, which is why I feel qualified to say that I think D&D’s crunch is boring.

D&D 5e is trying to be everything to everyone, and that is a very difficult thing to be. And by some metrics it is succeeding. 5e, by being approachable, simple(ish), and recognizable, has brought tens of thousands of people into this cool hobby and for that, I am deeply thankful. If 5e’s design goal was only to bring people into the hobby, then it would be a resounding success. However, I would argue it is also trying very hard to be an expressive storytelling system, an engaging tactics game, and what people think of when someone says “D&D.” On those fronts, I am less than impressed.

It isn’t hard to claim that 5e is trying to be approachable. If you look at previous editions of D&D (I’m looking at you 2e and 3.5e) you will see a lot of shit. Complex rolls, pages of feats and traits, detailed alignment charts, and some pretty strict combat rules. Of course you can bend these things for your own needs (that’s what makes TTRPGs so cool!), but as written there’s a lot of material and a lot of numbers. 5e seriously cuts down on that. Everything becomes simpler, and the sprawling number of classes, races, and monsters is reduced to a reasonable size.

The 2014 release of 5e was designed to be simpler, and the fact that a bunch of material was cut added to its approachability. A lot of elements have been added back via homebrew and later modules, but that core approachability hasn’t gone away. Couple this with immense brand recognition, and 5e is great at getting people to play it.

…But that doesn’t make it great to play. As written, 5e has a pretty binary pass-fail system for most things. Which is to say that if the DC (the roll you need to succeed at something) on an action is a 15, there’s no written difference between rolling an 11 and a 14. The 5e DM’s Guide does include a short section about introducing Success at a Cost (also known as partial successes) into your game, but doesn’t provide DMs a framework for doing so. Here’s an example of how this can become a problem.

During one early session of a 5e campaign, my DM introduced a living set of armor to an encounter. Animated Armor has an AC (number you need to roll to hit the damn thing) of 18. For low-level characters, rolling a 19 or higher on an attack roll is no small task. An attack roll is made up of your ability modifier, and your proficiency bonus (which at low levels is gonna be +2). If we’re assuming your character isn’t min-maxed, chances are your best attack modifier at Level 2 is gonna be a +3. So, you’re rolling d20+5 to try and get above a 19. You have about a one in four chance of doing this.

The Animated Armor is, similarly, not great at attacking. Which meant that, for several rounds, we had player characters and animated armors just standing still, whacking each other with Wiffle ball bats doing absolutely no damage. Close rolls felt absolutely terrible. Getting a 17 meant doing nothing, and all but wasting the round. This went on for a while until the last armor finally fell, un-animated, after an excruciating 10 or so rounds. It was not a fun fight. It lacked both expressivity and tactical depth, which 5e often does.

And I do not think the answer is blaming the DM for introducing Animated Armors too early, or the players for not coming up with creative solutions to the problem. The game’s design, centering combat above all else in terms of ability selection and build priorities, encourages this style of play. It’s a holdover from the series’ wargaming roots. Players who were new to the game did not have the familiarity with the medium to creatively problem-solve their way out of scrapes, which is the key problem with D&D. It encourages imagination and creativity on paper, but its standard ruleset doesn’t give players the tools to develop those skills.

Partial successes, which see players get what they want but with an additional consequence, have become a mainstay of the independent space. 5e does include a small note about partial successes in the back of the book, but it doesn’t try to teach DMs how to use it.

To use another system as an example, if you roll a 7-9 in first edition Powered by the Apocalypse games, you get a partial success. A partial success on a given move provides a list of additional factors that come with the success. Roll a partial success on attacking? You deal damage to the enemy, and the enemy deals damage back to you. If you roll a 7-9 on Defy Danger, the GM can pick from a list of other things that happen, which always drive the story forward. Once they become more familiar with the system, they can develop their own consequences. Failing forward is a fundamental principle in these games, and is written as such into the rules. D&D encourages these practices in writing, but rarely through its actual design.

5e can do virtually anything, it is a relatively easy system to modify, the question is whether or not it should. More specialized games exist, and they’re great! They give you actual storytelling frameworks, and then teach you how to use them. Once you have those tools, they apply to every system. 5e wants to be the game that teaches you these things; the preface to the Player’s Handbook says as much:

The first characters and adventures you create will probably be a collection of clichés. That’s true of everyone, from the greatest Dungeon Masters in history on down. Accept this reality and move on to the second character or adventure, which will be better, and then the third, which will be better still. Repeat that over the course of time, and soon you’ll be able to create anything, from a character’s backstory to an epic world of fantasy adventure.

Once you have that skill, it’s yours forever. Countless writers, artists, and other creators can trace their beginnings to a few pages of D&D notes, a handful of dice, and a kitchen table.

And it does help many players develop those skills, which is why some people love the game. But that’s the rule of large numbers. For a lot of people it doesn’t. I’ve watched group after group of people who want to play TTRPGs bounce off of D&D because its rules as written do not encourage them to do the exciting, creative storytelling they actually want to do! Instead it just hands them several dozen ways to kill a goblin, most of which end up feeling the same anyway.

So now that I’ve denounced 5e, I’m going to shout-out a bunch of games which do a great job of doing the things they want to do really well!

If you like crunching numbers, and using those numbers to tell interesting stories, try Lancer! Lancer is a game about giant robots in a massive space war, and the system really leans into the “about robots”-ness of it all. It’s a game about managing heat, and power, and using tactics to talk about feelings. It could be overwhelmingly dense, but this is alleviated by the fact that it also has a super cool virtual tool called Comp/Con that will help you keep track of all the numbers, and every piece of equipment in the game. Also, its art is beyond phenomenal. Like holy shit, look at this.

For games about scoundrels, look no further than Forged in the Dark games like Blades in the Dark, Scum and Villainy, and Beam Saber. This system puts you in the shoes of a daring weirdo who is very good at what they do, but under the incredible stresses of a life of adventure. These games are particularly improvisational and collaborative, allowing a GM to throw together a new heist or score in a matter of minutes, and focus on character growth through performance and goals instead of combat. They’re built around managing your character’s stress, and the competing goals of your crew’s members, which makes them incredibly fun to play with dramatic people who like taking big swings.

For people who just like telling short fun stories with their friends, there are a ton of one-shot games I absolutely love. Fiasco is a chaotic Coen brothers movie generator. Ribbon Drive is great at telling deeply personal stories about growing up on a road trip. The Skeletons is a really interesting storytelling game about the skeletons guarding a dungeon slowly remembering their past. I could go on about one-shot games for a while. Honestly, just go to Itch.io and browse. You’ll find something cool almost immediately.

I am going to regret saying this, but if you’re looking for a non-D&D game recommendation, just ask in the comments and I will probably have something for you. I love this stupid medium a lot, which is why I want people to try new and interesting games!