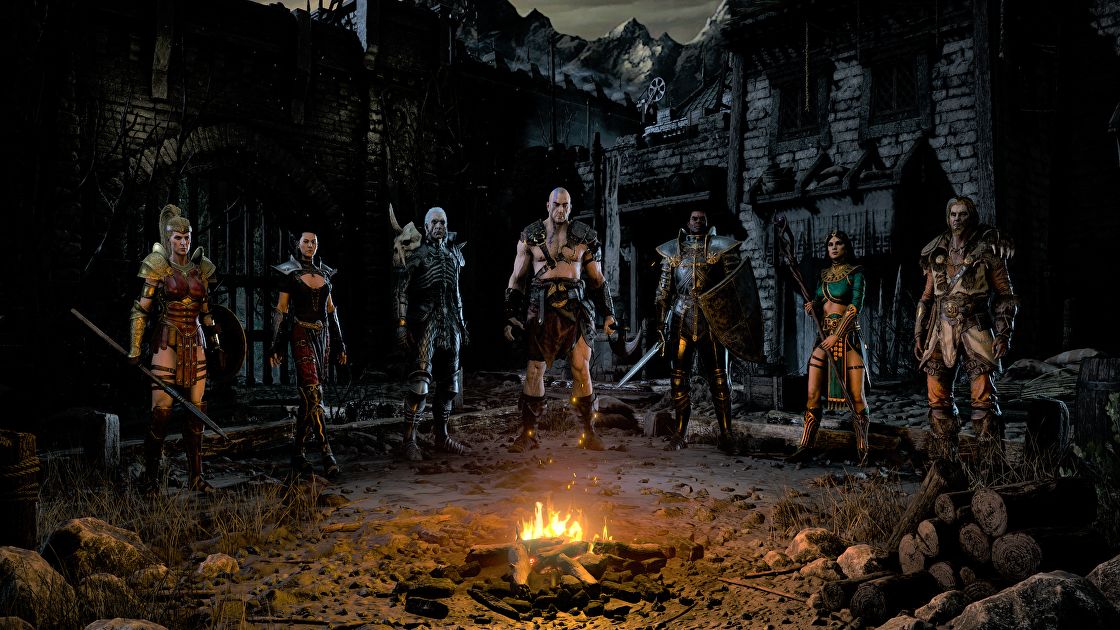 Looking for the best classes and builds in Diablo 2: Resurrected? The shiny new remaster is finally here, but the gameplay of Diablo 2: Resurrected will be very familiar to veterans. If you’re playing for the first time, however, the game’s complex character progression can seem overwhelming. The foundations of your experience are your choice of class, and the skill(s) you build around on that class. Each of Diablo 2’s seven classes features multiple talent trees that grant you new abilities and define how you approach the game.

If you’re planning to play on Hardcore mode or push deep into Hell difficulty, you will want a quality build. Blizzard has not made balance adjustments to Diablo 2: Resurrected, so the long-established meta still holds in the remaster. Prepare for Hell with our guide to the best classes and builds in Diablo 2: Resurrected.

Here are the best classes in Diablo 2: Resurrected:

With his holy magic and powerful auras, the Paladin is an incredibly powerful character both solo and in a party. Paladins have the luxury of both high damage and high defenses, easily picking up huge resists and max block chance (75%) with some help from their skill tree. As a result, Paladins boast two of the best builds in the game.

The famous Hammerdin is considered by some to be the best all-around build in Diablo 2. This build maxes out the Blessed Hammer skill, which hurls magical hammers that spiral out around the Paladin. Hammerdin can clear monster packs with ease and deal with bosses effectively. Plus, the build has room to pick up max block and stack magic find for effective endgame farming. Whatever your endgame goals are, Hammerdin can handle them.

Smite shifts some of your power out of clear speed and into single-target damage. That makes Smite Paladin one of the best (if not the best) boss-killing characters in Diablo 2: Resurrected. If you prefer farming bosses to farming mob packs, Smite is one of the best possible choices. You can delete bosses on Hell difficulty, and be nearly unkillable with endgame gear. If you’re looking to stack up Baal kills, Smite Paladin is for you.

The Sorceress has been one of the most popular classes in Diablo 2 for twenty years, and for good reason. This is Diablo 2’s most traditional spellcaster, and its most powerful. Sorceress has numerous top-tier endgame farming builds. Plus, she carries the strongest early-game boss killing skill in the game, Static Field, which reduces enemy health by 25%. Static Field a boss down to 1 HP and then hit them with any other ability once to farm bosses with ease. You get access to Teleport too, the best movement skill in the game. Once you reach Hell, the two main ice builds are your best bet.

The Frozen Orb spell fires an icy orb that spits out icicle spears in a nova as it moves. It’s a phenomenal spell for clearing packs since you can cast it then keep moving as the orb blasts enemies. In terms of raw magic-find mob farming potential, this is one of the most powerful builds in Diablo 2: Resurrected.

If you don’t like the playstyle you can quickly respec into:

A classic spell that appears in every Blizzard fantasy property (and I mean, no wonder), Blizzard is a more single-target-oriented alternative to Frozen Orb. While you can’t run and gun quite as effectively with Blizzard, you can put bosses on ice faster. Much like with Paladin’s top two builds, your choice here is about preferred playstyle. The Fire and Lightning talent trees have strong options too if you prefer something warmer.

If you’re familiar with the ARPG genre, you know just how broken summoners can be. The best defense is to never get hit, and when you have minions to do your dirty work for you that becomes a simpler task. However, Necromancer is far from a one-trick pony. There are powerful builds more in the traditional caster vein too. Whatever style you prefer, Necromancer is one of the top classes in Diablo 2.

The most common Necromancer summoner build focuses on spooky skeletons. Max out Raise Skeleton and use various Golems and Auras to supplement. You can also mix in Corpse Explosion if you want another button to press. For the most part, this build lets you sit back and enjoy the show. It’s a playstyle that isn’t for everyone, but if you enjoy summoning then this is the build for you.

For a caster-oriented build that differs thematically from Sorceress, Poison Nova/Corpse Explosion is a great choice. Cast Poison Nova, let your poisons tick until a mob dies, then blow the pack away with a series of Corpse Explosions. This is an active, multi-button build that makes for a more engaging clear than Summoner. Just remember, you won’t have corpses lying around in boss fights, so you’ll have to rely on Poison Nova. This isn’t much of a boss farmer, but you can farm standard mobs with minimal gear. Much like its Path of Exile equivalent in Detonate Dead, Corpse Explosion Necromancer makes for a great ladder reset character.

The Amazon’s best builds are a bit tougher to get started than Sorceress or Necromancer, but they scale beautifully. Amazon is a ranged attack specialist, using physical or elemental bow and javelin abilities. You’ll have to deal with ammo mechanics though, which can be a pain for some players. If you don’t mind the hassle, however, Amazon builds can be very powerful.

The classic Lightning Javelin Amazon build takes a lot more skill points to fully come online than many other builds on this list. However, once you get going you can shred any target in the game. Once you’re fully invested, your lightning javelins will split on impact and fire off-chain lightning that obliterates monster packs. With strong single target damage to boot, Javazon is one of the most versatile endgame builds in Diablo 2: Resurrected.

Amazon has several bow builds that vary pretty widely. You can’t really go wrong with any choice, but one of the easiest skills to set up around is Strafe. This attack fires a burst of arrows that auto-target nearby enemies. You can quickly clear packs with the auto-targeting, or loose a beam of arrows at a boss. Some versions also use the Valkyrie summon to help your Mercenary tank damage for you. If you prefer elemental skills, Freezing Arrow can also be strong.

In terms of thematics, Druid is one of the coolest classes in Diablo 2. It doesn’t get much better than transforming into a bear, after all. However, Druid also has a variety of caster builds that can compete with Sorceress, or just provide a change of pace if you’re sick of Frozen Orb.

Tornado is a great skill for farming with minimal gear. It pretty much does what you’d expect; unleash a series of tornadoes, and whirl your enemies away. You also get access to the Cyclone Armor skill, which provides a shield against elemental damage. Shoring up your defenses without high-end gear is a huge boon, especially on hardcore.

Want to be a bear? In Diablo 2, you can do that. The Werebear skill lets you transform into a bear and maul your enemies with fiery claws. This build is a bit off-meta, but it can absolutely work at a high level. Plus, you get to be a bear. Need I say more?

The Assassin is geared more towards Diablo 2’s PvP than PvE (or PvM, as Diablo fans call it), but she still has some solid builds for clearing the campaign. Assassin builds are broadly divided into trap builds and martial arts builds, or Kicksins. There are hybrid builds too if you want to mix up the playstyles. Traps are throwables that cater to a hit-and-run experience, while Kicksins get more up close and personal.

Trap builds tend to invest in multiple trap skills, as they have synergistic buffs that boost your power. However, you’ll typically use just one as your primary damage ability and invest in the other traps purely for synergies. Death Sentry is one of the best choices as a main trap. It fires bolts of lightning at your enemies, then explodes their corpses on death, damaging other nearby mobs. That corpse explosion makes for great clear speeds and helps the build function with minimal gear.

Dragon Talon is a sweeping kick that pushes enemies away from the Assassin. Typically, you’ll supplement its damage through one of a few other skills. Venom will add poison damage to your attacks, which is a self-explanatory benefit. You can also go with Phoenix Strike to add some elemental damage. You can even use the Shadow Master summon to help beat up mobs. Most versions of this build also use Death Sentry or another trap as an extra damage source, but you can go for pure kicks if so desired.

The Barbarian is your classic melee fighter, swinging dual swords all around the battlefield. Barbarians buff themselves up with Warcries, then tear foes apart with melee attacks. Barbarian’s best builds need some serious gear to get going though, so beware – this is not the most first-timer, ladder reset friendly class. If you want a lot of room to min-max though, Barbarian provides that.

One of the most classic builds in Diablo 2, the Whirlwind Barbarian glides around the battlefield, spinning like a human blender through the heart of monster packs. If you played Cyclone in Path of Exile or Diablo 3’s version of Whirlwind Barbarian, you’ll be very familiar. This build is great for all aspects of Diablo 2, it just needs a ton of mana leech to maintain your Whirlwind. A lot of players really love Whirlwind, but if you’re new to Diablo this is best saved for a second or third character due to the gear requirements.

Frenzy is a dual-wield-only attack that increases your attack speed with every hit. Once you get revved up, you’ll smash enemies. Frenzy has some of the highest single-target damage in Diablo 2, though the area of effect is smaller than Whirlwind. While that makes killing packs take an extra second, Frenzy makes up for it with an enormous movement speed buff. If you like zooming around the map, Frenzy is the skill for you.

That wraps up our rundown of the best builds and classes in Diablo 2: Resurrected! Now you’re prepared to pick a build that suits your unique style and successfully push to Hell difficulty. We’ve got a breakdown of Diablo 2’s Runeword system for the uninitiated, as well as a guide to some of the best farming spots in Hell difficulty if you’re thirsting for more. We’ve even got a guide to finding the secret cow level!