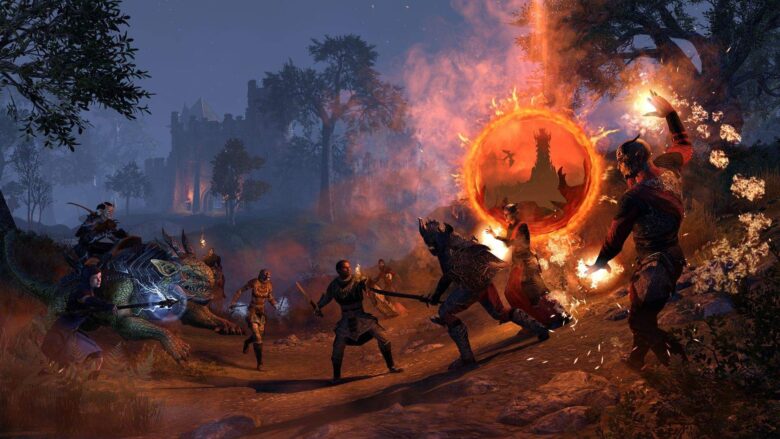 As the community collectively unlocks the achievement, they’ll also unlock various unique rewards, including an exclusive pet, cosmetics, furnishings, and the upcoming Deadlands DLC (arriving on Xbox One and Xbox Series X|S on November 16). All unlocked rewards will be available to be claimed by Blackwood Chapter owners at the event’s end, so be sure to check the Bounties of Blackwood page regularly to see the community’s progress! If you don’t own Blackwood, now is the time to jump in – The Elder Scrolls Online: Blackwood is on sale for 50% off now through October 12.

In the upcoming DLC, The Elder Scrolls Online: Deadlands, you can experience the cataclysmic conclusion to the Gates of Oblivion year-long adventure and explore Mehrunes Dagon’s own realm of Oblivion. Even better? You can begin this adventure right now by jumping into the Deadlands Prologue questline (available free for all ESO players) from the in-game Crown Store. The Deadlands DLC arrives November 16 for Xbox One and Xbox Series X|S.

Explore Blackwood’s most stunning locations, earn rewards, and unlock the upcoming Deadlands DLC for free during the Bounties of Blackwood in-game event. Don’t forget, you need to own the Blackwood Chapter to participate in the event and claim its various rewards — luckily for you, it’s now on sale in the Xbox Store, so get out there and discover Blackwood! Xbox Game Pass members can also start their adventure with the base game of The Elder Scrolls Online available with their membership.

The Elder Scrolls Online Collection: Blackwood is the ultimate Elder Scrolls experience and includes the Base Game and all Chapters:
• Blackwood (New for 2022)
• Greymoor
• Elsweyr
• Summerset
• Morrowind

ULTIMATE FREEDOM—Create your ultimate RPG character, play solo or adventure with friends, and determine your fate in an ever-expanding world. With no level restrictions, go anywhere, at any time in a truly open world. In The Elder Scrolls Online, the choice is yours.

CHOOSE YOUR ADVENTURE—With a new tutorial, begin your adventure where you like: emerge from Coldharbour in the base game, battle Dragons in the Elsweyr Chapter, or get ready to face the Prince of Destruction Mehrunes Dagon in Blackwood, the latest Chapter. All content is accessible for new players, and you can switch adventures whenever you like.

INCLUDES LATEST CHAPTER: BLACKWOOD—As part of the Gates of Oblivion adventure, a deal made with the Prince of Destruction comes due in Blackwood. Explore Imperial cities and murky bogs, uncover Mehrunes Dagon’s sinister plot, and never adventure alone with the new Companions system.

Includes The Elder Scrolls Online base game and the Morrowind Chapter. Join over 18 million players in the award-winning online multiplayer RPG and experience an ever-expanding story in a persistent Elder Scrolls world.
• ESO COMES TO Xbox Series X|S – Experience the award-winning RPG like never before with game-changing features/enhancements such as 60-fps performance mode, advanced lighting and shadows, improved reflections, shorter loading times and more!
• BEGIN YOUR ADVENTURE – Discover Tamriel’s Second Era and enjoy all the epic quests, memorable characters, and dangerous enemies you expect in an Elder Scrolls game.
• PLAY YOUR WAY – Battle, craft, steal, siege, or explore. Combine different types of weapons, armor, and abilities to create your own style of play.
• TELL YOUR OWN STORY – Experience any story in any part of the world, in whichever order you choose – alone or with friends.
• INCLUDES THE MORROWIND CHAPTER – Journey to the iconic island of Vvardenfell and stop a meteor from crashing into Vivec City