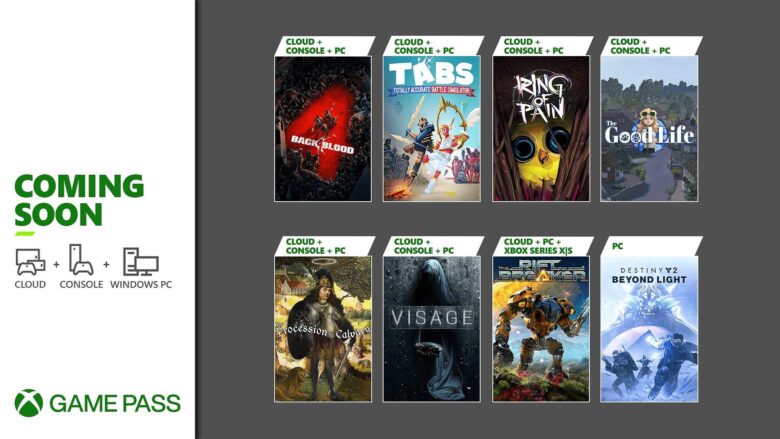 It’s the start of spooky season! We have games ready to fright and delight for the first part of the month. Keep your eyes peeled for more games coming to you on day one, and plenty more treats in store. Let’s get into it!

Totally Accurate Battle Simulator (Cloud, Console, and PC) [email protected]
Totally Accurate Battle Simulator celebrates its full release after a successful run in the Game Preview program! Be the leader of wobblers from ancient lands, spooky places, and fantasy worlds. Watch them fight in simulations made with the wobbliest physics system ever created, make your own wobblers in the unit creator, or send your army off to fight your friends in multiplayer.

The Procession to Calvary (Cloud, Console, and PC) [email protected] – October 7
A Pythonesque adventure game in which you journey through a richly detailed landscape built from hundreds of Renaissance paintings. Embark on a quest as an unnamed heroine to hunt down the tyrant Heavenly Peter. Encounter a bizarre cast of characters, perplexing puzzles, and implausible scenarios.

Back 4 Blood (Cloud, Console, and PC) – October 12
Available day one with Xbox Game Pass: Back 4 Blood is a thrilling cooperative first-person shooter from the creators of the critically acclaimed Left 4 Dead franchise. Experience the intense 4 player co-op narrative campaign, competitive multiplayer as human or Ridden, and frenetic gameplay that keeps you in the action.

Destiny 2: Beyond Light (PC) – October 12
A new power is born out of the ancient Pyramid ship above Europa’s frozen frontier, and a dark empire has risen beneath, united under the banner of the Fallen Kell of Darkness, Eramis. Join your fellow Guardians and bring down the empire at any cost – even if it means wielding the Darkness itself.

Ring of Pain (Cloud, Console, and PC) [email protected] – October 14
Enter the Ring of Pain, a roguelike card crawler where encounters come to you. Each step around the ring is a dire decision. Go for the loot or backstab a creeping horror? Meet strange friends bearing gifts and treasure. Choose your gear wisely to survive and discover secrets.

The Riftbreaker (Cloud, PC, and Xbox Series X|S) [email protected] – October 14
Available day one with Xbox Game Pass: You are an elite scientist/commando inside an advanced Mecha-Suit. Enter a one-way portal to a distant planet with the purpose of building up a base that will allow travel back to Earth and further colonization. Build up your base, collect samples and research new inventions to survive.

The Good Life (Cloud, Console, and PC) [email protected] – October 15
Available day one with Xbox Game Pass: Journalist Naomi Hayward is drowning in debt. Having accepted a request from The Morning Bell newspaper to “uncover the mystery of a small English town,” Naomi finds herself far from her home in New York, in Rainy Woods, known as “the happiest place in the world.”

Windows 11 has begun rolling out to users around the world. A brand-new Windows experience, Windows 11 is available through a free upgrade on eligible Windows 10 PCs and PCs that come pre-loaded with Windows 11 will start to become available for purchase. Thanks to its superior graphics and amazing speed, games on Windows 11 can look and play better than ever before.

Windows 11 has the Xbox app built right in, allowing you to browse, download, and play over 100 high-quality PC games with Game Pass for PC. The timing couldn’t be better, as October kicks off the three biggest months in Xbox history, with incredible game launches including Age of Empires IV on October 28, Forza Horizon 5 on November 9, and Halo Infinite on December 8. Each of these games will be available to Xbox Game Pass Ultimate and Xbox Game Pass for PC members on day one. Finally, Xbox Game Pass Ultimate members can also play more than 100 Xbox console games on their PC without having to wait for a download, thanks to the power of Xbox Cloud Gaming (Beta) with the Xbox app.

For complete details on what else Windows 11 has to offer, head over to the Windows Blog.

Xbox Game Pass Ultimate members can now access Xbox Cloud Gaming (Beta) via the Xbox app on Windows 10 (or later) PCs to play high-quality Game Pass games! Join me on a walkthrough of this experience on PC and a rundown of everything you need to get started. Bonus points for keeping up with the controller count.

In Case You Missed It

AI: The Somnium Files (Cloud, Console, and PC) – Available now
In a near-future Tokyo, detective Kaname Date is on the case of a mysterious serial killer. Date must investigate crime scenes as well as dreams on the hunt for clues. From the mind of Kotaro Uchikoshi (Zero Escape series director), with character design by the Yusuke Kozaki (No More Heroes, Fire Emblem series), a thrilling neo-noir detective adventure is about to unfold.

Dandy Ace (Cloud, Console, and PC) [email protected] – Available now
Dandy Ace is an over-the-top fast-paced roguelike experience that follows a fabulous magician seeking to combine and use his magical cards while fighting and looting his way to defeat the Green-Eyed Illusionist, Lele, who has imprisoned him in a cursed mirror. Every run provides new challenges and combinations for players to explore as they progress closer to Lele.

Lemnis Gate (Cloud) – Available now
Harness the abilities of powerful operatives in mind-bending 4D battles as you disrupt the past to change the future. Lemnis Gate liberates you from the constraints of time to offer a relentlessly inventive multiplayer experience deeply rooted in tactical FPS gameplay. Exploit the unlimited intricacies of time travel and forge your path to victory.

Marvel’s Avengers (Cloud, Console, and PC) – Available now
Marvel’s Avengers is an epic, third-person, action-adventure game that combines an original, cinematic story with single-player and co-operative gameplay. You’ll be able to assemble into a team of up to four players online, master extraordinary abilities, customize a growing roster of Heroes, and defend the Earth from escalating threats.

Unsighted (Cloud) [email protected] – Available now
The few androids that remain are running out of Anima, the energy that gives all robots consciousness. It’s up to you, Alma, to save your friends from becoming Unsighted. Explore the vast ruins of Arcadia, using every tool you can find. Time is ticking. They need you.

Minecraft: Seaside Story – Available now
Do you have the luck of the sea? Find out as you reel in bass and baubles, tripe and treasure! Sell your collection in town or strive to display every type of fish in this relaxing map!

Sea of Thieves Season Four – Available now
Sea of Thieves’ latest Season sees players plunge into the Sunken Kingdom to explore its many mysteries – and plunder its riches – while battling Sirens and other dangers of the deep. Season Four also brings a wealth of new Trials, cosmetic rewards, Commendations, achievements and more!

Wasteland 3: The Cult of the Holy Detonation DLC & Colorado Collection – October 5
Xbox Game Pass members save up to 10%! Venture into the Cheyenne Mountain complex to take possession of a power source that could make Colorado Springs into an electrified utopia, or a smoking crater. It’s up to the Rangers how they’ll handle this radioactive situation. Plus, members can save up to 20% on the Wasteland 3 Colorado Collection, which includes Wasteland 3, both The Battle of Steeltown and Cult of the Holy Detonation expansions, as well as the Colorado Survival Gear bonus items.

Battlefield 2042: Early Access Open Beta with EA Play – October 6-7
Be among the first to experience the next generation of all-out warfare in the Battlefield 2042 open beta. Join the fight on Orbital with a diverse selection of Specialists, cutting-edge weaponry, and vehicles to choose from. Early access is available on October 6 to 7 for all players who pre-order the game or are current EA Play members and Xbox Game Pass Ultimate Members. Pre-load the beta starting today!

RuneScape: Skilling and Currency Pack – Available now
Enjoy this brand new RuneScape Perk for Xbox Game Pass Ultimate members that offers a big boost to your skilling! You’ll be levelled up in no time with this bumper-pack of XP-boosting items, a huge wad of in-game currency, loads of Treasure Hunter Keys and a free Xbox-green imp Companion!

Be sure to carve out some time to play the following games before they leave the library. As always, this doesn’t need to be a final goodbye, be sure to use your Xbox Game Pass membership discount to save up to 20% before they go!

It’s now that part of the post where we say something about catching you next time. Until that time comes, be sure to follow us on Twitter at @XboxGamePass and @XboxGamePassPC to get a heads up when these games are available to play. Catch you next time!